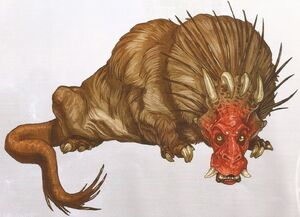 These air-breathing, degenerate cannibals are most likely the remnants of a far more sophisticate civilization from the distant past. Long-lived and semi-intelligent, the ylhathi have a very rudimentary language, strong religious beliefs, and even a wide variety of superstitions. Their leaders are religious figures who interpret omens in just about everything that happens.[1]

Caverns beneath the Moon's surface

Climb and run as level 4.

A single ylhath attacks with a crude but still vicious melee attack, or perhaps it will throw a hefty stone to attack a foe at short range. In a group, however, ylhathi are far more dangerous. Five of them can attack as a single level 5 creature, inflicting 6 points of damage.

Ylhathi leaders don't engage in this kind of mass attack, however. A leader will always carry a crude implement of religious importance - an icon, a statue, a symbol, or the like. When the leader brandishes the implement, all ylhathi within sight of it are roused and inflict one additional point of damage per attack. A group of five roused ylhathi attack as a single level six creature, inflicting 8 points of damage.

It's pretty difficult to reason with an ylhath, but it is possible to either deceive or intimidate one. They fear anything that might seem like a dire omen or an angry message their gods.

These savage brutes are conducting a bizarre and elaborate religious ritual, and the PCs literally wander right into the middle of it.

Occasionally, explorers from Earth have found a cypher, an oddity, or even an artifact in ylhathi possession. The creatures don't seem to know how to use devices, but something in their racial memory says they are in terms of importance.[2]

To the residents of Earth, the ylhathi might be thought of as abhumans, but unlike abhumans, there's no evidence that these beings actually come from human stock originally or even have any genetic relationship to humanity whatsoever.[3]