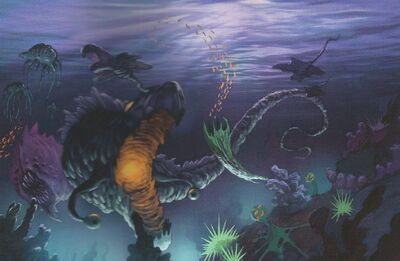 Xeobrencus is a rogue planet holding a vast ocean that's teeming with life.

Instead of being an icy planet like many others that float aimlessly in outer space, Xeobrencus strangely enough is very liquid and oceanic. Many living species lurk beneath its waves, amid continent-sized growths of coral, free-swimming polyps no larger than nano-particles, giga-titanic fauna of nearly unimaginable size, etc. Instead of relying on sun that doesn't exist, life here uses geothermal energy instead, specifically relying on a mineral called silacthonite. Xeobrencus' oceans are so rich in energy that leaks from the silacthonite that the seas will even glow vast swaths of blue, even when viewed from outer space.

Normally, Xeobrencus' amount of silacthonite energy would prove lethal to creatures that comes from worlds orbiting stars, as they would soon quickly die from an illness that burns and destroys their tissues from the inside out. but the lifeforms native to Xeobrencus utilize it as a never-ending source of nutrition. Most creatures have grown to be way larger than titanothaurs (classified as the largest living creatures on Earth).

Found throughout the star, including around the Ninth World, are special objects known simply as Xeobrencus stones. These stones serve as keys to transdimensional psychic pathways powered from within a structure on Xeobrencus called Nordramu Citadel, generating a phenomenon that transfers the mind of its owner(s) to the body of certain lifeform found across the planet. While usually one one mind is transferred to one creature, there's also the possibility of a bunch of explorer's minds being transferred into a giant creature called an Ulagra, which will require them to work together to operate their new shared body.

Xeobrencus' atmosphere is not suitable for creatures native to Earth, as such, explorers will require some kind of breathing apparatus like a breath recycler. Though there's also a sickening energy flux caused by radiation from the planet's stores of silacthonite, making the surface even lethal for those not used to strong levels of radiation (large swath's of its ocean, referred to as "blue zones" due to the color of their glow, are actually radioactive in nature). A flux suit, however, may provide enough protection.

Unfortunately, said suits won't protect their owner from raging storms that occasionally erupt above the sea. These storms bring with them catastrophic waves, lightning, waterspouts, and even vortices, where clouds and ocean spray become hard to distingush. Even on a watercraft, these storms will still prove very deadly, whether above or below water. Their only possible haven would be to hide within Nordramu Citadel.[1]

Most flora and fauna native to Xeobrencus are similar to those found on Earth, except far larger in size. Various parts of the ocean host great swaths kelp while coral swell up like underwater mountains. Flying creatures almost resembling birds will fly across the skies when storms aren't present, all while insects the size of ships scurry along the border between air and sea. Their are countless varieties of fish, but thanks to their shared energized environment, certain factors exist among them:

· Massive, purple flowered sea kelp will stay afloat with the assistance of flotation bulbs that are filled with tiny insects venting lighter-than-air gas.

· Ferrenk Sea Grass - Plantlife that grows only near blue zones along the ocean floor and, when flowering, turns the zone briefly nonradioactive, sucking every last glimmer of energy for itself and depriving other organisms of their nutrients.

· Movan Coral - A type of coral that produces structures so large that they can go well beyond the surface of the ocean, until an ulagra smashes them down a peg.

· Orv - Predatory sea creatures that speed through the water via an innate, psychic propulsive ability, creating wakes with their massive forms.

· Yalla - Bird-like creatures the size of houses that launch themselves from out of the sea via jets of rapidly-compressed water.

· Xakak - Huge insects that grey on larger lifeforms, including ulagras, by netting them with massive cocoons made from very sticky chords.

A survey scout ship with a single pilot from the sorg descended to the surface using advanced technology to mask its location. The Diluvian will offer a great reward to anyone that can obtain a sample of said stealth device.

One of the largest entities on the planet was injured in a storm and has since retreated to its depths. Unfortunately, however, several explorers from the Ninth World remain trapped within its wounded body, and the group mind still can't figure out how to act yet. Without any aid, the ulagra body will surely die as well as the minds transferred to it.

Atavistic ranthra, the Diluvian, marine automatons, and even some of the ulagras are interested in knowing exactly what lives within a green crystal dome that was recently discovered in one of the deepest locales of Xeobrencus. All attempts so far to infiltrate it have ended in failure, with most cases having killed or permanently wounded those who've tried to enter.

A sphere that's little less than a mile in diameter will sometimes appear in the sky above the seas. Any creature within a few miles of said object that sees it and uses either language or telepathy to speak will activate it, triggering audible sounds akin to whistles, beeps, and thrumming vibrations. Once theses sounds have emanated, the sphere will vanish once more for months or even years.

A derelict sailing vessel made from a mixture of black synth, crystal, and flickering red force fields will lie partly crushed into the side of some coral mountain approximately 200 miles from Nordramu Citadel.

The ocean floor's complex topology will include several rift valleys. One that remains unnamed is cluttered with barnacle-encrusted objects of various sizes and shapes - a graveyard of numenera crafts and devices, possibly dating back to a time when the ranthra were still sapient.[3]

An explorer that uses a Xeobrencus stone will switch bodies with an alien lifeform from the waters of Xeobrencus will be leaving an alien mind in charge of their smaller form. Different aliens will react differently to their new manifestation, some will become awestruck, other shut down, and a few may even become violent.[4]

Despite its name, the "Xeobrencus" stone, most of these artifacts are actually native to other worlds, including Earth.[5]

All life native to Xeobrencus will regain one point of health whenever in proximity of the planet's radiation, which is literally everywhere on Xeobrencus.[6]

The so-called "Great Dream" is actually the state of mental sub-sapience in which most ranthra will spend their entire existence immerse, purposefully never quite reaching that state of mental cognition complex enough to care about the future.[8]