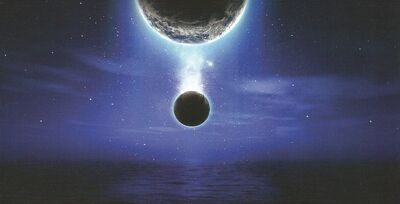 Xell is a distant world in the milky way galaxy. It is close to Vinuet.

Xell Primus is an expansive world of wide oceans and rocky, craggy landmasses teeming with unintelligent life. The atmosphere is roughly like Earth's, but the gravity's twice as strong.

Xell Secundus is a surprisingly Earthlike world bathed in energies that make it impossible for anything to live there. Visitors will suffer three points of damage per hour from these energies.

Xell Tertius is a small world, more moon than planet. It is entirely artificial too; a dark world, devoid of neither atmosphere nor gravity, honeycombed with caverns and tunnels - storehouses for millions of sophisticated machines used to store information. Throughout the catacombs, one can find points where the information is accessible. Accessing said information is a hard task (difficulty 8) while using it is even harder (difficulty 10). If one is successful, however. He or she can learn the answer to almost any question in the universe. At the same time. Tertius's system constantly attempts to gain new information from the person accessing it. No rewards can be acquired in doing so, however.

Abusing the access to such information - perhaps by asking too many questions - alerts guardians who look like torus-shaped metal constructs 8 ft. across, with swirling vortices at their cores. These beings have the same stats as dark fathoms and can attack relentlessly.

The energies of Xell Secundus extend visibly outward toward Tertius, holding the small world forever in place. Luckily, these energies aren't at all lethal to Tertius. From the surface of Xell Primus, one can see the other two worlds locked together with a tether of energy. Their presence in the sky causes tides on Primus that are more like tidal waves that occur every morning and every evening. The flora and fauna of the large world have adapted to these scheduled deluges.[1]