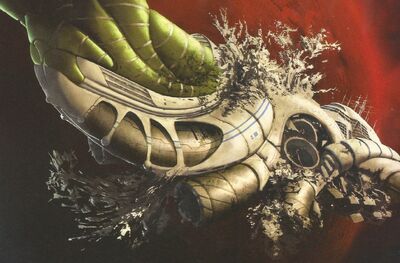 The Wreck of the Vlerryn is a ruined starship from the Ninth World that orbits around the sun.

Looping away from the Earth for years at a time before disappearing out of the void once again for a brief rendezvous, a void-sailing craft from a prior age called the Vlerryn wanders in lonely isolation. A monstrous disaster struck the Vlerryn, almost as if a manifestation of the Iron Wind had blown across the vessel, twisting both the structure and its crew into an atrocious work of art.

But the Iron Wind wasn't what destroyed the Vlerryn. Rather, its doom was initiated by Mozck, a numinous creature of sadistic and unpredictable nature whose automaton minions burned through the warcraft's halls. Mozck's infection of the craft forced the last surviving members of the crew into an act of desperation, one that finally rendered local instances of Mozck inactive (at least, along the Vlerryn) but at the cost of their own lives and their vessel's spaceworthiness.

Prior to Mozck's arrival, the Vlerryn was crewed by the Moonwreckers, a group of explorers originally hailing from Qi. They discovered a crashed ship from some prior world, buried on Earth, and got it back up and running after a few years of exceptional effort. From there onwards, the Moonwreckers departed from the Ninth World and sailed into the continuing their adventures within the airless realms of outer space. They dubbed their craft the Vlerryn, after one of their companions that was lost during the retrofitting process.

Sadly for the Moonwreckers, on one of their adventures, they brought aboard a dormant component of Mozck. [1]

• Abipona Scar - Once a notorious outlaw, Abipona was skilled in the art of tactics, leading, and long-distance combat. She was also well known for her distaste for abhumans and the love she had for a grisly scar that ran down one side of her face like a lightning bolt.

• Narris - With a body that was fused partly with an automaton, Narris was able to interface with any pior-world machinery and proved instrumental in reanimating the Vlerryn itself. He was well known for accomplishing similar feats for the Aeon priesthood before his disappearance. He was also known for his special silvery orb that allowed him improved access into the datasphere.

• Zadra Araime - A woman who possessed a strange talent for manipulating magnetic fields (either for offensive or defensive purposes or for investigating the interior makeup of unknown artifacts). Working together with Narris, there was almost nothing the two couldn't identify.

Desite its derelict state, some interior atmosphere still remains throughout the ship. However, an explorer can only breathe it for about one hour before passing out from the low-pressure effects. Beforehand, the difficulty of their actions would be increased by one step due to a constant feeling of nausea and dizziness. To prevent this, some kind of suit should be worn such as the extra envirosuits that were left over within the cargo hold, though controls within the flight deck could also normalize the air.

The interior is also considered to be a zero gravity environment.[3]

Similar to its regular entry locks, the larger of them which leads into the ship's main cargo bay will require a couple of moments to cycle before opening. It will reveal a large, internal space filled with synth containers of various sizes, but about half of which appear to be smashed. Inside is also a tiny vessel which, despite its damage, can be repaired with a few days work by someone trained in the numenera. The vessel will have the power to depart the Vlerryn and head back to Earth, moon, or any of the other sun's children.

If one scavenges the area, they'll find5d6 shins and a couple cyphers, though they also might uncover four salvageable envirosuits and even a helper drone.[4]

Their are normal sized airlocks on each side of the ship, and each will require a few moments to come up to low pressure before opening up to their respective interiors. Both seem to be scored with scratches, loose or severed cables, that may have once ran through the bulkheads, and some random debris. The wall panels will appear both unpowered and dead and anyone wishing to access them will detect only empty static.[5]

Strange crystalline growths that sprout like fungi alongside bundles of cables can be found contained behind bulkheads which dominate this place. Malfunctioning illumination panels along the walls will flicker unnervingly. A grim psychic aftertaste also lingers, making it not so hard to imagine that something horrible had transpired aboard the vessel.[6]

Consisting of just a few spaces, the crew quarters are dilapidated in the same fashion as the main access shaft. One might scavenge them for personal items throughout the wreckage, including 4d6 shins and a cypher. However, the search can also turn up the remains of a human, wearing leather face mask, most likely a breath recycler, but whose cranium has burst with a hard, amber-like substance that crystallized long ago, almost as if the victim's grey matter was transformed, found its bony confines to be too small, and burst free, only to re-solidify afterward.[7]

What once propelled the Vlerryn across the solar system was contained in complex devices throughout this particular chamber. Even in their somnolent state, subtle vibrations strum through everything. Spiky crystalline growths of pinkish synth coat various surfaces but luckily haven't critically breached any of the objects yet.

An explorer who seems learned in the numenera can spend time studying the situation long enough to discover that the chamber's mechanisms were apparently designed to easily understandable, hence why Ninth Worlders were able to reignite the machinery. But in order to do so, the process would take up to 2-3 days max, alongside search or fabrication of a few key broken components in the workshop, plus a coordinated effort with someone working the flight deck. It should be noted, however, that the process may also waken the dormant Mozck intelligence aboard.[8]

Throughout this chamber are various strange devices as well as spiky growths of synth patches similar to the ship's exterior and within engineering. A couple benches will hold technology held in place with slender tethers. One can search through the assembled parts long enough to uncover enough spare parts to create up to 2 cyphers.[9]

This specific chamber holds 3 reclining chair-like devices, one of which seems to hold a human corpse, freeze dried and light as a foam pillow. One can also notice a device above with multiple cutting arms and poking needles attached to the ceiling over each of the chairs.

This device is capable of healing most injuries, curing most diseases, and even eradicating most poisons. Anyone who's trained in the numenera can easily reduce the difficulty of said healing tasks by about 3 steps. [10]

Various control surfaces and crystal display screens jot this locale, though more spiky growths and loose cables are also present. Several chair-like devices sprout from the floor near aforementioned control surfaces, but in one of those lies a freeze-dried male corpse strapped to it. Within the hand of one skeletal arm is clutched a silvery orb while the other is a mere prosthetic. The orb is an object called the oracle node and the man wearing an artifact as a prosthetic arm used to be Narris. Apparently, his prosthetic arm became possessed by Mozck, reached up, and crushed his throat.[11]

The Awakening of Mozck[edit | edit source]

When dormant instatiations of Mozck are ever triggered, either by accident or on purpose, they slowly begin to reform into the many spiked patches of pink synth found all throughout the ship. Any that "hatch" will pursue explorers with the intent to kill them or mutate them in some horrific manner. All the while, the automatons will also try to regain control of the vessel and fly it towards any one of the sun's children. Once it has arrived at its destination, the automatons will begin construction of some massive object, using magnetic filaments and raw plasma as building blocks. If this unknown object isn't stopped in time, the project could most likely endanger the very sun itself.[12]

Rumors say that when the Moonwreckers first left the Ninth World in the Vlerryn, they saw another ship, nearly identical to it in ordbit, the other vessel still appeared to have power.

Records in Qi suggest that the Vlerryn held a secret compartment where the moon wreckers stored a powerful biomechanical device they found on a moon far from the sun.

A strange yellow-green mist rises from out of the pit where the Vlerryn was first excavated. Anyone who breathes in the mist finds that, for the next few days, the only word they're able to say is "eye."

Sometimes, within the engineering chamber, noises (including words spoken aloud) are repeated from 1-5 minutes later after they're first made.[13]