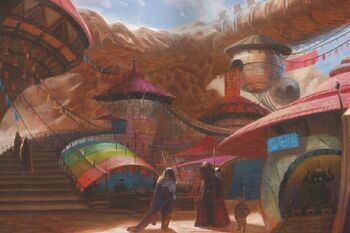 The Whispering World is an alternate dimension where the Ninth World became overrun by a nanite infestation that caused most of the population to become Whispers.

The Whispering World is a parallel version of Earth that diverged into its own timeline only a few years prior, when a nameless nanite-distributed war protocol from prior ages was accidentally released from stasis. The nanites would then literally infest everything throughout the world, including most living creatures.

Whenever an intelligent creature hears the specific activation code, it will begin to change over the course of just half a day, until only the facade of the creature remains, and nothing else. The newly created Whispers will be tougher and less reliant on food, possess eyes the color of metal, and would sprout one or more metallic antennae from their heads. Whispers act with the single goal of finding other, non-converted intelligent creatures, with which to verbally relay their trigger phase.

This is the reason for why most urban centers like Qi have become empty and neglected, save for the occasional whisper wandering the streets, mumbling about. It's the reason why villages stand either empty or burned out, after survivors tried to stand off the whispers or turned on themselves, fearing that one or more of their own were transforming. It's the reason why lone travelers met on the road should probably be put down a distance rather than allowing them to get close enough to speak. And its the reason as to why the few survivors who move about are desperate, broken, and in need of some kind of permanent solution. If they don't find a solution soon, humans within the Whispering World may go extinct a second time around. Though it might already be too late, considering how few non-turned, intelligent creatures still exist along the surface.

Visitors from other dimensions exist at a slightly different frequency than the natives, thus providing them some resistance against the trigger phase used by whispers. This is why a group of survivors rigged a dimensional trap to draw in natives from the other Earth, which they use as guards, scavengers, and perhaps even as saviors. Considering how thoroughly the whisper population inundated the Whispering World, it's only a matter of time before some of their number find their way into the base dimension and spread their change their too. Thankfully, however, those that have slipped through were discovered and quickly dealt with. Regardless, their presence ultimately proves that an ultraterrestrial threat of grave significance exists that needs to be dealt with sooner or later.

Any method of interdimensional travel can take one to the Whispering World. If one uses a gateway or phase-changing device, they'll probably arrive at some geographically synonymous spot located within a prior-world ruin or other out-of-the-way location. Characters might not even know that they've slipped into an alternate timeline at first, at least, not until they've traveled somewhere and discovered the strange lack of people, and after further exploration, come across the whispers themselves.

The portal in the prior-world installation of Yenth, which would normally lead to New Yenth, sometimes malfunctions and will send those who pass through it to there instead. To those that make the trip, it just seems as though the gate simply malfunctioned until they investigate further.[1]

Animals and plants from the Whispering World are practically the same as in the Base dimension. As such they still remain strange by-products from previous eras.[2]

• Fortress of the Amber Monolith

In return for a cypher, Quanon of Stirthal (when in his self-aware state) will use his impressive abilities to tap into the datasphere and answer one question from a petitioner.

The Sapphire City had failed to begin moving (and thus offering its protective chimes) after its last rest, so the council of the five seek aid in understanding as to why, or at least in safely evacuating the city before whispers can gather.

Song of the Night:[edit | edit source]

At times, the whispers will stop mumbling their trigger phrase and instead sing a strange and alluring song that is beautiful and enchanting. When their song ends, they'll then return to their normal behavior.

Every once in a while, a small whisper with shockingly white hair and pale skin will appear among the others, but never tries to say the trigger words. Instead, it will attempt to engage any survivors in conversation.[3]