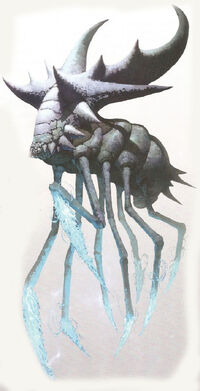 Wharns are large, lumbering, space beasts built for an ancient period of war.

Wharns are void-adapted behemoths. If prompted, the datasphere responds that wharns are living battle automatons that fought during a prior age, serving as the first line of defense - though against what isn't made clear. An age later, wharn descendants now glide through the airless night for centuries at a time, as if either dead or deactivated. But don't be deceived, however. For reasons known only to themselves, these behemoths sometimes light up, their open eyes burning with deadly energy, and their flex claws of particle-beam fury.

In spite of this ferocious aspect and war-machine heritage, wharns don't destroy every craft (and void-adapted lifeform) they come across, or even most. Indeed, sometimes a wharn may attempt to initiate communication via various machine channels. But what comes across are usually nonsense sounds and tones, and sometimes, mathematical formulas.[1]

Anywhere floating throughout the void, often along the periphery of the Phaeton Halo

Most of the time, wharns are inactive and might just seem to be tumbling artifacts. In this state, explorers might be able to partly wake one in an attempt to negotiate. However, if a wharn is damaged, or if the passive senses deep within its body wake it to combat for reasons of its own, the creature becomes aggressive. Because of its size, a wharn can attack large vessels, and because of its discerning senses, it can also go after human-sized targets.

A wharn's primary weapons are its claws, which can extend within an instant, becoming exotic matter beams able to reach a target within 20 miles. Unless a target is protected by some kind of force field, the 10 points of damage inflicted upon the victim ignores Armor.

A wharn's eyes can pierce most forms of camouflage, cloaking effects, and cover that's less than about 700 ft. thick.

If interaction with a warn can be at all initiated, the war machine will be willing to transmit strange tones and mathematical symbols indefinitely. After at least an hour of such communication, someone attempting to collate the information provided can tease out at least one simple statement, which is that "Mozck must be eradicated."

The carcass of a wharn can presumably be salvaged for dozens of cyphers (or more).[2]

A wharn will always activate and attempt to destroy any craft, system, or automaton that's been touched by or is currently infested with Mozck.[3]