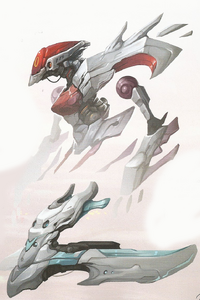 A warcore is often found in an inert state and mistaken for a single unit of iotum called quantium (which would appear as a synth box small enough to be held in the palm of your hand and filled with tiny points of glittering light).

If the "quantium" is incorporated into a numenera device or structure and the project is completed, the warcore soon manifests itself. The implanted entity takes over the device and updates its physical form with dangerous plumes of nano-sized fabricators. It turns what might've been a useful installation or vehicle into a manifest warcore: a house-sized construct built simply for war and destruction. Once fully initialized into a physical form, warcores follow what was apparently their last command: lay waste to everything around them. Little can sway the entities other than destruction. Even then, a warcore heart can likely still be retrieved.

If recognized prior to being integrated into a device or structure, an attempt can be made to talk to the core and learn from it. Doing so is dangerous, because opening a channel to the warcore means that the warcore has also opened a channel to you.[1]

Anywhere salvage can be found

Understanding numenera and crafting as level 8

Each round, a manifest warcore can make one of the following kinds of attack: two attacks with long-range energy weapons, one missile attack that can jet a very long distance and detonate in an immediate radius, or a short-range disintegration beam capable of turning structures and objects into powder within an immediate radius of the beam's focus. Manifest warcores regain their health at a rate of one point per round, Even when they're at zero health. The only way to stop this restorative process is to remove the warcore form either the device or structure that became a manifest warcore.

An inert warcore is dangerous only if someone attempts to communicate with it using telepathy or the mechanical equivalent. If communication is opened,, the awakened warcore attempts to first disrupt the thought processes of organic and machine intelligences and then proceed to take over that intelligence. A target with a connection to the warcore that fails an initial Intellect defense roll takes 5 points of intellect damage (ignoring Armor) and is stunned and unable to act for their next turn. If the connection remains between the warcore and the stunned victim , the target must succeed on a second Intellect defense roll that's hindered by two steps. On a failure, however, they become enslaved by the warcore and begin to act destructively until the channel between them is severed.

Always treat a manifest warcore as a rank 3 rampaging beast.

Opening a channel of communication with a warcore is dangerous. Only overriding a warcore's implanted commands could cause it to act differently, and that's only for a few rounds. Sometimes, a Scan esotery or similar effect is sufficient to open a channel of connecting between a PC and a warcore for a couple of rounds.

The nearby ruin's rich in various kinds of iotum, including any excess quantium.

A manifest warcore can be salvaged for 2d6 shins, 1d6 cyphers, and three rolls on the Iotum Result Table.[2]

Manifest warcores destroy everything around them and then attempt to locate the nearest active community to further repeat their atrocities.[3]