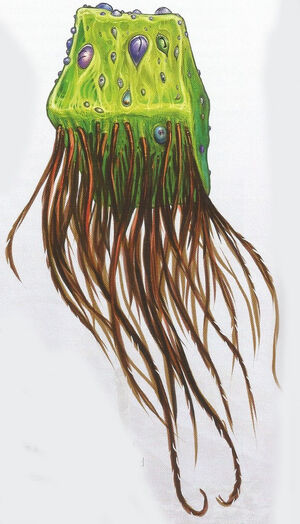 Shaped vaguely like a square 3 ft. on a side, a viscid watcher is a translucent swimming mass of living jelly covered with all manner of eyes, some large and deep, some small and glowing, and others that appear as simple dots. Each variety of eye is specialized, allowing the viscid watcher to collect enormous quantities of information merely by sight. O more concern to most people is the watcher's trailing frill of long, poisonous tendrils. Still, that doesn't prevent some from hunting the creature, for its flesh is considered a delicacy in many areas, even more so because of the danger inherent in gathering it.[1]

Almost anywhere along coastal regions, often in groups of two to five

If a foe ceases to attack a viscid watcher (either because it chooses to do so or because it's become debilitated), the watcher will usually swim off instead of pressing its attack.

Viscid watchers are immune to attacks that inflict damage or exert influence through psychic or telepathic methods. In addition, they're fully aware of creatures that are out of phase, invisible, or at a dimension removed from the normal world.

To the extent that viscid watchers are known, most people regard them as dangerous pests or hazardous delicacies. If telepathic contact were attempted, and a viscid watcher were offered something to its advantage, one might learn that these creatures are intelligent and know a great many things, though they're content to watch, not act.

A caravan shipping a living viscid watcher in a sealed, water-filled aquarium falls under murden attack and is lost. PCs might be tasked to find valuable edible creature only to discover that the murden have put an aquarium in place of honor in their community.[2]