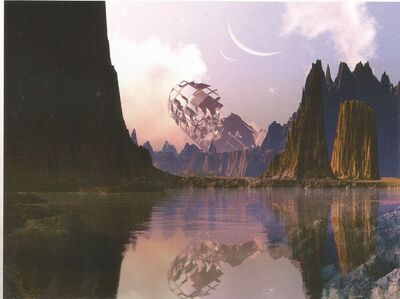 Vinuet is a distant world over 30,000 light years from the center of the galaxy. The closet known planet is Xell.

Far from its Blue Star, six moons orbit Vinuet, with its main inhabitants, the Eluvia.

A large, tower-like, ruined structure standing more than a 1,000 ft tall lies upon its surface and teems with powerful artifacts and discoveries. It's the only one of it's kind on the planet. However, while it holds weapons defenses, vehicles and other helpful devices, it also contains terrifying creatures held in stasis, deadly viruses held in containment, easily-triggered detonations of powerful energies, mind affecting narcotics, etc. Careless exploration of the structure could not only spell doom for its explorers, but also for the nearby inhabitants.

The Leader of the community that resides next to the tower is led by an Eluvia female named Speaker Brahn Igo, who sees it as her duty to keep foolish or unwary individuals from causing trouble from within the tower.

The largest Eluvia structures are stone temples erected to honor the Eluvia gods, each represented by one of Vinuet's six moons.[1]