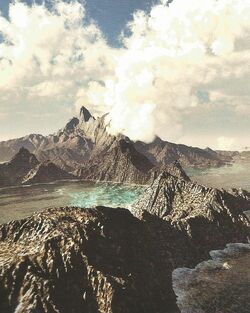 Uvesina is limited dimension consisting of a chunk of landscape stolen from Earth.

A landscape that might have been stolen from Earth floats as a limited dimension all its own in an air-filled space lit by a tiny but brilliant point of light beamed from the underbelly of a massive structure that floats much higher overhead. Mountains, lakes, meadows, forests, and other elements familiar to any dimension walker from Earth can be found in Uvesina. The surface's borders are cracked and splintered, and fall away into emptiness, possibly suggesting that the land was literally stolen from some other more standard dimension. Here and there, prior-world structures are visible, most in some significant state of despair.

However, visitors to Uvesina also soon discover that the realm has inhabitants that manifest as swirling swarms of white light drawn to those who enter prior-world structures. If a light swirl notices an intrusion, it approaches the stranger and begins to pulse its illumination as if attempting to gain the explorer's attention. A human that studies this pulsing light might become entranced by the pattern and stand rapt if they fail an intellect defense task. If a character stands so hypnotized for more than a minute, the character's higher mind begins being physically transferred out of their physical body. Each minute this occurs, the characters falls one step on the damage track, but is permitted one intellect defense roll each time to avoid that effect and regain their senses. Characters who come back from having their mind transferred have a hard time describing the experience,but sense that whatever the massive structure is that floats above the land, it's where the mind was being recorded, or perhaps consumed.

Every fifty hours, the light from enigmatic structure switches off for ten hours. The absolute darkness brings plunging temperatures. During the final hour of darkness, it becomes so intensely cold that those without extremely warm clothing suffer one point of damage each minute. When the point of brilliance returns, temperatures quickly climb back to a level comfortable for humans.[1]