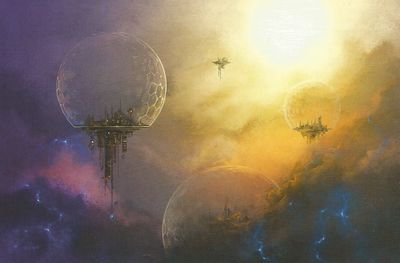 Urvanas is the closest planet to the Sun, populated by humans descended from Ninth World residents and a Native alien race known as the Lux.

There are floating cities above the surface of Urvanas that hold atmospheres breathable to humans. Even beyond the domes, at and near the layer over the clouds where the cities are commonly found, both the temperature and pressure are ideal for human life as well as the native Lux, though they would still need a source of supplementary breathable air. None of that is true, however, when going at least 30 miles lower than that layer, leading to the surface region fittingly known by human residents as "deathlands" and "Zhoh" by Lux.

Those who are either condemned to a life of crime, decide to take their on lives, or who simply slip and fall are said to be taking the "Death Dive" (or simply the "Dive" for short). The pressure from thick, dead air means that the surface is hot enough to melt some metals and synth. At ground level, the pressure is nearly 100x that of the Earth. The conditions can easily destroy unprotected Lux, Humans, or even most machines and vessels that weren't specifically created with high pressure and/or heat in mind, and that doesn't include the immense electrical storms and massive volcanoes that sometimes explosively erupt along the surface without warning. Even above the clouds, storms and winds can whip up to colossal ferocity with relatively little warning. When this commences, the cloud cities automatically generate static force shields to issue protection to their inhabitants, but anyone inside a small craft or on a windrider faces a serious task just to keep above the clouds, nevertheless remain on course during the storm.

Gravity on Urvanas is about 90 percent that of the Earth's, thus humans operate without hindrance (even with a bit of spring in their step) and Lux are the most at home. A day on Urvanas is well over a hundred Earth days long. Most clouds cities prefer to remain in daylight and generally move in the direction of upcoming dawn quickly enough to stay ahead of the darkness.[1]

· Drift Trees - Adapted trees, varying in size, that float sparsely and freely among the clouds.

· Bubbleworms - Connected masses of twinkling spheres that move almost like unified worms, though the bubbles can change place or form shapes more complex than simple columns. At least some of the bubbles serve as stomachs, and any animals and plants caught on the sticky exterior are visibly digested within each cavity.

· Blatherswifts - snakelike twists of curling flesh (or possibly vine) constantly swinging through the air in erratic zigzags and swirls as they emit an annoying noise. When more than a few are spotted at once, it means that a massive storm is coming.

· Stratoflies - Bugs that buzz about on diaphanous wings of translucent green and red, feeding on all manner of small insects and animals. They rarely try to eat either humans or Lux, though there are exceptions.

· Fungus Puffs - Varying in size (from at least 3 ft to hundreds of feet in diameter), these organisms constantly shed a silvery pollen that burns like fuel when concentrated and is toxic to breathe.

Far more creatures live within the cloudscape of Urvanas, and nearly without exception, those that die cease there flight and begin their Dive.[2]

The cloud city inhabitants travel between cities primarily by air craft called Urvanas windriders, though some others decide to ride flying beasts called Malorks. A few refurbished flying vessels, some originally designed for travel through outer space, also fly between the prominent cities on a regular basis. Most are run by well-known traders whose first priority is cargo and the upkeep of trade routes, but passengers are allowed to buy passage on such craft, the most renowned vessel being the Perseverance, which is captained by a Lux named Garing that likes to trade in spices among other luxury goods.

Perhaps the most difficult part of flying between cities is the fact that the cities themselves are always moving, thus knowing where a particular city is at any given time can be rather troublesome. However, each city has an innate sense of where the others are and the ability to cajole and steer cities in a desired direction, especially to meet with another city, is a very rare talent that some Lux and Humans have actually developed. Those who do it are highly sought after. Everyone else, however, must rely on a knowledge of wind currents, city habits, it's previous venues, and the seasons to know where a specific cloud city lies. Luckily, Cyphers commonly called Cloud City Guides (often created by the Nightwatchers) can greatly help in this situation.[3]

Below are the known aerial cities of Urvanas, among a couple other unique locations related to the world:

The Truth is Out There:[edit | edit source]

A lux driven by curiosity regarding the past believes that his race has lain fallow long enough and may have devolved from a highly technical species. He seeks out explorers willing to travel up to Aato and find a means to restore the lux to the godlike status he believes they once had. Most lux who hear of his aspirations decry him as an apostate.

Overcoming philosophical differences, savage lux srays and a small army of human raiders riding malorks have teamed up, forming a group called the Ghosts of Urvanas. Only a lust for power and wealth seems to motivate the Ghosts, and they've already overtaken several cloud cities.

Shiny, blue insectoid creatures sometimes blow in on storms that afflict the cloud cities. The insects are a recent phenomenon and, unfortunately, seem to hold a taste for the city domes. Several of the cities have already been sent to their dooms, their domes punctured, in a city-sized Death Dive. a female Nightwatcher named Ladrana says she knows the source of said insects, but to reach it would require a trip down to the surface.

At rare and even irregular intervals, the Green Moon pierces the clouds with a burning beam of light as bright as the sun. The light is never (apparently) focused on any known cloud city or creature. Rather, it act more like a searching beam, burning down through the choking clouds as if hoping to reveal something far below the surface.

More than cloud cities and flying flora/fauna move throughout the skies of Urvanas. A fleet of barely-functioning automatons also limps through the cloudscape on a mixture of air jets, gravity nullifiers, and internal lift devices. Most of them look partly melted, as if they survived either a great conflict or explosion.

Citizens from various cloud cities have reported seeing the top of a tower poking from out of the clouds during heavy storms - a tower with lights, crystal windows, and the appearance of activity from within. So far, no one has been able to dispatch any windriders while the storm rages, and afterward, no sight of said tower remains.[4]

A day on Urvanas is well over 100 Earth days long. Most of the cloud cities prefer to remain within the daylight and will generally move in the direction of the oncoming dawn quickly enough to stay ahead of the darkness.[5]

Based on its position in the Solar system and its Environmental conditions, it can be implied that Urvanas used to be the real-world planet of Venus millions of years prior.