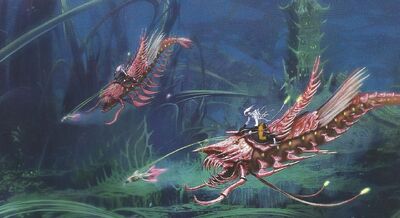 Urtillas are large, undersea predators that can be used as mounts for those skilled enough.

Prized as mounts, urtillas are massive crustaceans that scuttle across the ocean floor but also swim. They possess long tendrils that end in bioluminescent nodules, so they provide their own light even in the darkest depths. These carnivores prey upon large marine animals or entire schools of smaller fish. They aren't picky eaters and will even swallow a human (and his diving suit and gear) if need be

Urtillas aren't particularly bright or astute. They get what they need through brute force or not at all..[1]

Anywhere in the ocean

Climb as level 6; resist trickery as level 3; Speed defense as level 3 due to size.

Urtillas have huge maws. IF they strike with a bite, a foe smaller than the urtilla must make another Speed defense roll. Those failing the second roll are held fast and suffer an automatic 6 points of additional damage each round until they escape.

Obtaining an urtilla mount almost certainly involves getting one when it's very young and training it from the start. Urtillas are never friendly companions and likely wouldn't hesitate to eat a rider if the opportunity presents itself. Thus, most riders use a strong reward or pain incentive (or both) to keep them under control. It's not uncommon to see a rider with a long staff holding a live fish in front of the urtilla to urge it onward or direct its movements. Spikes embedded in the urtilla's shell can also control it through pain. More sophisticated riders might use some kind of electrical prod device.

An encounter with a hungry urtilla, followed later by another creature using them as mounts, might garner some respect for the riders in most character's eyes. Alternatively, a situation in which a PC must use an urtilla mount - ever wary that the creature she's riding would just as soon rip her to shreds - can be a real experience.[2]