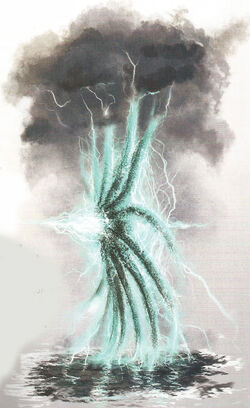 Ulagras are large creatures that thrive among the waves and storms of Xeobrencus.

As large as cities, ulagras are the behemoth natives of a sunless world called Xeobrencus.

Like a vast starfish, an ulagra is far swifter and more vital than the slowly creeping, much smaller echinoderms found in some seas of Earth. Measuring about 600 ft. in diameter, these creatures are like lightning made flesh when storms rage. That's when ulagras stir from happy dreams to race across the waves, searching for prey, ulagra mates, or even a chance to dance amid the thundering sprays and mad chaos of a Xeobrencic storm that other native lifeforms wisely eschew. Both the energy absorbed and discharged by ulagras during these periods is immense, and though a process not easily understood, it might precipitate psychic transference between an ulagra and a creature on another world - or, on rare occasions, the physical translocation of the ulagra to a different world.[1]

Speed defense as level 5 due to size.

An ulagra can strike at every creature within short range with its multitude of arms, and even those who succeed on a Speed defense roll will take 6 points of damage. Any creatures within immediate range are subject to 7 points of damage each round from its electrical aura. In a round during which it doesn't use its arms to attack, an ulagra can instead discharge a massive lightning bolt at any target within sight, inflicting 20 points of damage. Following its lightning attack, the ulagra's immediate-range electrical aura is suspended for one minute. An ulagra active inside a storm or a similar electrically charged area regains 2 points of health per round. If the ulagra would otherwise take direct damage from an electrical source, it will instead gain the same number of points to its health (even if that increases the ulagra's health above its normal maximum).

Thanks to Xeobrencus stone, the PCs find themselves inhabiting ulagra bodies. They can interact with one another and with other ulagras as equals, but the primal power and surge of elation that soon runs through them makes it hard to concentrate on anything other than frolicking across Xeobrencus. Ulagras do possess sapience, and if one's attention can be acquired, negotiation is definitely possible. In all other cases, interacting with an ulagra will require some kind of telepathic ability.

During particularly impressive electrical storms on Earth, reports of a vast, many-armed creature gamboling across the seas - and smashing hapless watercraft flat in the process - are a mainstay of the seafolk, who have begun to revere the entity like a minor deity of destruction and the storm.[2]

Psychic transference of ulagra minds with creatures of other worlds usually requires the use of a Xeobrencus stone, though not always.[3]