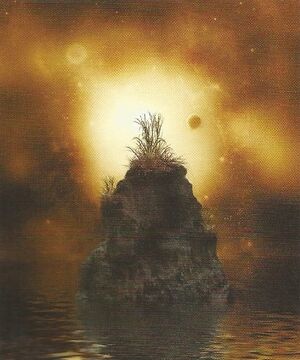 Ujehaar is a limited dimension controlled by an octopus civilization native to Earth.

The world called Ujehaar lies in an alternate dimension, but is known to the oldest Earth civilization : the octopuses. The octopuses, who answer to Her Majesty, Queen of All Octopuses, maintain a portal to Ujehaar because of valuable materials they can extract from the place , namely the mineral illavium.

The only known portal to Ujehaar lies in the Coral Cathedral, which is always guarded by two octopuses. Beyond the portal is a drowned world with no sun, but which is lit instead by a blazing, stellar phenomenon that constantly blasts invisible energy across the ocean surface. The octopuses call this light Ylim, and they say they can hear thousands of voices in the "static" that saturates their telepathic senses when exposed to Ylim. Whether octopi or something else, creatures who spend too much time in Ylim's light often sicken and die, though a few survive and develop startling new mutations.

Despite most of the world being underwater, portions of Ujehaar poke out of the water, where they're bathed in the strange celestial energy. Over time, the ceaseless bombardment transforms the native rocks into the psychically resonant mineral known as illavium that underlies so much octopi technology.

Some above-water mounts possess life that thrives under Ylim's harsh light. If leaves of certain grasses are collected and processed using octopi know-how, the drug called startal is produced, which can grant immortality.

Every so often, an octopus sent to Ujehaar to collect plants and minerals hears the voices threading through Ylim's light and decides to stay, despite the very real danger of death. Most do indeed sicken and die, but the few who survive live in isolated locations across the planet. collecting mutations and listening to the rapt awe to the voices that rain down with the celestial blaze. Known as Ylim's priests, these octopi (plus two humans - twins called Kad and Karana) sometimes appear at the portal site and regale the mineral and plant collectors with descriptions of events and wonders that don't exist in any known universe.

Once every few years, Ylim flickers and dims. During this period, which lasts about a month, the octopuses from Earth flee back to their home dimension while Ylim's priests retreat into specially reinforced strongholds of their own. Terrible entities - which the octopi call nemesi - rise from Ujehaar's silt-covered floor and scour both the waters and air for all living things, including insects and plant life, and consume them, until Ylim's eventual re-emergence sends them back into hiding.[1]