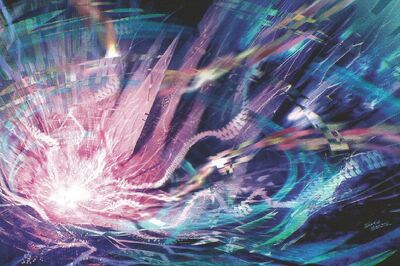 The Tumult is a bizarre dimension composed of, and inhabited by, pure sound. It's natives are intelligent sounds known as Grazions and Scordaturns.

The Tumult is created by a symphony of tones, voices, chimes, and sounds not even definable. Long, wide tones tend to make up the "resonance islands" in a whisper-tossed sea of rustling. Each of those islands hosts an ecosystem of murmuring winds, predatory roars, rising tones that stretch away into the soft distance like the blades of grass, and all manner of tinkling, bleating, purring, and even bleeping noises roaming around like tiny creatures in a forest. Existence is what's created by all the sounds working together to insinuate a harmony. Pure silence is very rare, and will usually indicate sickness, storms, or the presence of evil influences.

Native creatures will manifest as standing waves of sound, and will always emit a basic variety of noise, as a result. This is pretty much how other creatures throughout the Tumult can recognize each other. By stifling their sound, creatures of the Tumult can move unseen, but remaining silent is akin to holding one's breath in a standard dimension, and no normal creature can do it for more than a few rounds without risking dire consequences to their continued existence.

Within the Tumult, gravity doesn't exist, and neither does light, heat, pressure, or other environmental factors one normally equates with a specific location. That being said, native creatures can sense an "environment," simply by listening. Any visitors to the plane that manage to figure out the dimension's rules survive by visualizing the sounds they feel around them. This is akin to a condition that some humans have reported when they smell numbers or even feel taste, called synethesia. In this case, visitors can learn to "see" sounds.There are many landscapes constructed from sheer noise, reverberating weather, and even climate in the Tumult. However, this metaphor is far from perfect.

Considering how visitors aren't instantly destroyed by the shift in physicals laws, it's possible that some connection does exist between the base dimension and the Tumult. Another hint at some connection is that creatures from the Ninth World can be drawn into the Tumult by simply humming the "wrong" tune. Such transport-tunes are recorded as symbols inscribed on ceramic plates buried deep under the seas or even scattered along the moon's dark side, as recorded scraps that are sometimes played by the datasphere as an unexpected response to some unrelated query, and in one particular case, wound into the music of a traveling song.

If one were to enter the Tumult by means of either the Grinder of Infinities or the Crystal Ship, the vehicle in question would remain as a specific standing tone, though in order to recognize its presence amid all the other sounds around them would be just one more task for dimension walkers to do.

Visitors are unable to see anything, since they'll lack any kind of physical form once they arrive, they can only hear. A background hum will be heard, which will gradually sharpen, so that after just a few moments, other sounds like trills, clicks, basso calls, glissandos, etc. can become more audible, almost like a symphony, and creating almost a texture from the combined sounds. The sounds can literally be used to create a mental picture for the visitors.[1]

At first, visitors might be confused, since speaking to one another within the Tumult would result instantly in a disorganized chorus of honking, clicking and thundering noises. But if they harmonize their sounds to try and create a pleasing rhythm, or song (a difficulty level 2 Intellect task), they will become part of a chord-like sound that not only sounds pleasant, but also allows them to communicate similar to telepathy.

This method of communication can also be used with other intelligent sounds across the Tumult. Though not all are friendly, and some will purposely create discord and shatter harmonies.[2]

An individual's exact location throughout the Tumult is relative, and as such, anything that one hears will exist within the same resonance as the current location of the individual. Resonance islands are basically metaphorical rooms, forged from sound, which contain many items and creatures, all of which will usually interact with one another.

Without specific knowledge of the harmonies resonance islands each possesses, visitors may or may not be able to travel to one. Sounds that act similarly to maps or information passed from one sound to the next would usually help in this situation, though exploration could also serve as an alternative.

To identify a specific sound, a difficulty 2 Intellect task is required, until one becomes more versed in tumult's ways. If the sound acts like a sort of barrier, an Intellect roll can still bypass it. For creature sounds, communication can be facilitated if they're intelligent, otherwise combat will most likely ensue with the more aggressive types.[3]

Sound waves can fight with one another by either creating disharmony or jarring dissonance, drowning out the weaker noise with an overpowering volume, or even creating zones of smothering silence through the generation of destructive interference. Some examples of combat methods are described below:

Dissonance: - For anyone not native to the Tumult, creating an audible dissonance is arguably the easiest way to attack, in order to do so, that individual must succeed on an Intellect attack, if successful, they'll inflict 2 points of Intellect damage (ignoring Armor) upon the intended target.

Destructive Interference: - This is very difficult method to pull off, but it can also prove to be the deadliest. Attacking a creature using destructive interference with one's own sound increases the difficulty of said attack. If successful, they would inflict 6 points of Speed damage (ignoring Armor) on the target.

Harmonic Influence: - Perhaps a far more difficult method, due to their subtlety, is utilizing the various forms of harmonic influence that some creatures within the Tumult use to hide from influence, take control or, even to drive a target into extinction by producing so sweet a harmony that the target can't help but go along with music, even if it leads to their demise. Attacking a creature with harmonic influence via one's own sound will increase the difficulty of the attack by 3 steps and will require an Intellect attack roll. It successful, they will take complete control of the sound for one minute.[4]

Both the landscape as well as fauna are very difficult to differentiate from one another within the Tumult. Nevertheless, anyone interested in cataloging the diverse kinds of life throughout the Tumult will be pleased to discover a menagerie. Floating bubbles of song rise from some deep reservoir, sleeting motes rain down like chimes, a breeze will bring the sound of clarinets, and a chanting can gather at the periphery of all being.

However, some sounds within the Tumult are also predatory in nature, hunting on other tones instead of merely bathing in them:

Etudion: - What may at first appear as an annoying echo of other sounds will soon follow more quickly after the quarry sound until it attempts to merge with and cancel its victim, smothering it completely.

Dissonance Eels: - Manifesting as slithering whines that can infect other sounds through their own simple iterations. The prey may throw off a dissonance of its own or instead succumb and unleash a new generation of dissonance eels.

Chant Spiders: - Dangerous sounds that can swarm unsuspecting victims in a chorus of droning tones that can overwhelm and free a victim in place. Once ensnared, the victim is devoured over hours as the spiders suck down the trapped tone's vibrancy.

Feeders: - Creeping, low-toned entities that cling to discontinuities throughout the soundscape known as Graveyards. Feeders will only move over disabled tones and absorb their final bits of sound and life into themselves.[5]

A group of travelers from another dimension, possibly human in nature, have appeared within Symphony. A small band of scordaturns ended up robbing them of objects the explorers apparently need to get back home.

A hardy explorer named Kadura warns that the Quietude is about to massively expand, possibly overtaking several prominent locations throughout the Tumult, in the process.

An entity calling itself Melodic will periodically arrive in Symphony with the answers for any question it's given, no matter how difficult it might be. While active, a nearby graveyard will disappear.

Emanating from a resonance island along the Tumult's perimeter, blasts of overwhelming sound will pummel any nearby creatures, inflicting 1 point of damage to everything each time. A grazion named Sarralan had fashioned an overtone that promises to reflect the next sound blast back to its source, with the intention of permanently destroying it, whatever it may be. However, a scordaturn named Kaldurmor claims that the overtone could have exactly the opposite effect, and instead multiply the effect of the destructive sound many times.[6]