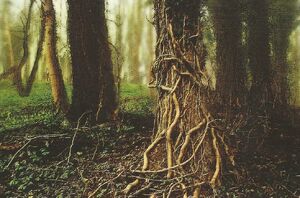 Vegetation smothers the planet Trytherhon, a world cognate with Earth. A vast forest covers the entire globe, even choking the seas. Creatures other than plants reside there, too, but are mostly winged vermin. Almost all entities on Trytherhon are plant-based. Vines, walking leaves, snakelike roots, rotating leaves taking flight, and striding bushes are just a few examples. The most prolific variety of creature is a species of rooted tree known as the elders. The elder's boles reach hundreds of feet in the air, but their roots reach far deeper. Animate and interconnected, the roots generally don't move during the day, for that's when the elders rest within each other's dreams, when the entire world dozes in connected peace.

The elders could easily solve problems that limited minds, such as those of humanity, could not. But without the aid of telepathy or something similar, communication with the elders is near to impossible. If communication did become possible, human-level intelligence would find the vast dreams of an elder overwhelming, and potentially even dangerous. Like drowning, those who become entangled in a green dream would have to fight their way back to reality. If they succeed, they might just return with the answer to a difficult problem.

However, the elders aren't truly cognizant of the variety of life which humans represent, or even that such things might harbor intelligence. This becomes abundantly clear at night. To stray into Trytherhon at night is suicide, for that's when the roots of the trees animate, burrow up from the ground, and hunt vermin - including humans, if any happen to overstay their welcome.[1]