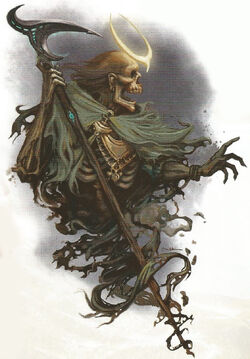 Time wraiths travel across dimensions of both time and space in pursuit of those whose actions threaten to cause time paradoxes. It's not quite certain if they're a natural defense mechanism of the universe, or some sort of remnant species that suffered a casual disaster that wiped them out of existence, leaving only time wraiths. If the latter, then time wraiths may be all that's left of the time adepts of Panaton.

When a time wraith selects a victim, it takes on a vague, immaterial semblance of that victim - if the victim were a century dead, withered, and desiccated, and made up of immaterial wisps of matter.[1]

Flies a short distance each round; can phase immaterial body through physical objects of its level or less

A time wraith attacks creatures by touching them. Each time it does, a portion of the victim's flesh becomes withered and desiccated while a matching portion of the time wraith gains the texture and health of the wraith's victim. If someone inflicts damage on a time wraith with an attack, the attacker must succeed on an intellect defense roll or suffer the same fate. If a creature is killed by a time wraith, the victim's body appears as if it has been dead, rotted, and partly mummified for dozens or hundreds of years. At the same time, the time wraith takes on the immaterial semblance of the just-slain victim, whereupon it displays inhuman amusement as it seems to fade away. Given its ability to phase through solid material, a time wraith is adept at surprising foes.

Once a target has been identified, time wraiths single-mindedly pursue it.

A device capable of seeing a few rounds into the past also leaves a trail of withered corpses. The latest owner believes some sort of time spirit inhabits the item, and thus wants someone to "exorcise" it.[2]