The Tides are the currents of urge and emotion that flow through humanity's collective psyche. Usually, they are as inviolate as the air surrounding humanity. However, entities that are capable of perceiving and manipulating the Tides appear in the history of the worlds, with the most notable being the Changing God.

The Tides represent complicated concepts that aren't entirely definable by language. Those who acknowledge the Tides have given them symbolic colors based on how they appear to correspond with emotional and psychological reactions:

These five Tides form the basis of how your actions will be perceived in Torment: Tides of Numenera. It should be noted that none of these concepts are as simple as "good" or "evil". A Silver-aligned player may use their fame to help someone. A Gold-aligned player might help someone purely for their own benefit.

The tidal effect is called the Legacy.

The Tides can be manipulated in many ways and with different results:

Tides represent the collective psyche of humanity and in their default state, they are harmonious, allowing for normal human interactions. Everyone remains connected.

Problems begin when humans discover the Tides and attempt to manipulate them. The ancients of the previous worlds discovered this power and wreaked havoc with it, leading to the creation of the Sorrow. Its task? To stop immortals from polluting the world with discord, which is what happens when you tune the Tides in one particular person.

Since everyone is connected, you are also un-tuning all the people around the first, and the discord of their vibrations spreads to still more, until cacophony reigns: A five way polarization of the extremes of human response. Some become too emotional, some too rational, some too proud, some too profligate – whatever. Normal human interaction becomes impossible. Insanity becomes the norm.

Behind the scenes[edit | edit source]

The Tides form a major gameplay mechanic of the Torment: Tides of Numenera video game.

During the pre-production of the game, Adam Heine produced a table to help better understand the Tides: 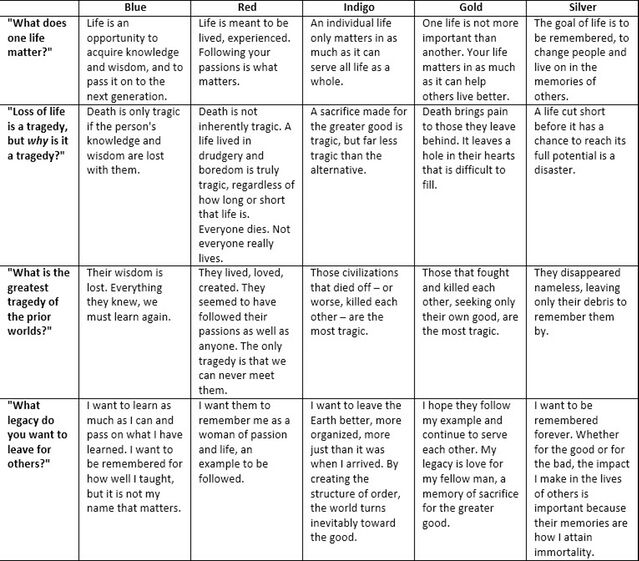