The Menagerie is a large collection within the Phaeton Halo of countless objects and creatures from across the cosmos.

From the outside, the Menagerie looks like a completely white decahedron, just over a mile in diameter. It usually tumbles throughout the deepest reached of Phaeton, though it has been spotted in other parts of space (i.e. above the surfaces of Naharrai, Earth, Urvanas, etc.) leaving many people to believe there are duplicate structures scattered across the stars. The white material which coats the outside of the structures is actually an impenetrable, opaque force field. Usually, Ghamalso himself has to operate the force field so that an opening can be made for anyone he wishes to allow inside, however, rumors do abound of daring pirates who've managed to pierce the force field on their own power. [1] 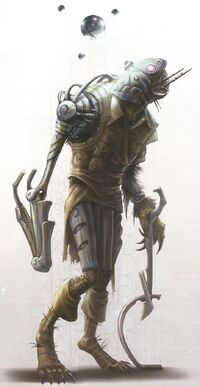 Ghamalso appears to be a humanoid alien lifeform with a hunched back and skin that's covered in some shiny, black down. His left arm naturally ends in a 5-taloned hand while the right is actually a machine manipulator that would be envied by his employed otolin servitors. His face is always hidden beneath a helmet-like device, which sprouts various auditory ocular dishes, spinning lenses, and antennae. Calling it his "head prosthesis", Ghamalso claims it allows him to observe every aspect of his surroundings. Those who've stood a little close to it have recalled a faint mental static emanating from the contraption.

Upon arrival to his home, those allowed to pass through the force field are usually escorted by his otolin servitors to a finely appointed salon, filled with sculptures, light displays, painted artworks, and unique devices hidden behind a layer of crystal. Soon after, Ghamalso himself comes to greet them, where he'll either inquire about the nature of their visit or explain the reason why they've been invited in the first place. He will also visit the salon to converse with bounty hunters and inspect the rare valuables they bring him. If the items are rejected, he'll send them off again to search for something more valuable.

Ghamalso also serves as a great source of information for all things related to the region around the Earth's sun. However, he also travels to other places beyond in order to expand his collection, on occasion. But in order for visitors to gain a bit of information out of him, sell something, or even try to obtain something from within his collection, Ghamalso will require something unique in return, either in the form of an object or information depending on the transaction in question. It should be noted that he has no rules against the acquisition of living, sentient beings and may even suggest that one of the more interesting members of a visiting party stay with him as part of his collection, for a century-long term. Unless something of equal value can be substituted, he will insist on the arrangement. This is, perhaps, one of the main reasons as to why he'll even invite people over, either that or figure out what they know as well as whatever interesting objects they might've encountered.

A few decades in the past, Ghamalso happened to encounter an object he calls the "Sherangeval", which looks like a jet black rod that's kept on his person at all times. When he first touched it, it blew off his hand and since then he uses his prosthetic manipulator arm to handle it. He was also imprinted with the vision of an unimaginable place he had never seen before, known as the Thon Iridescence. It seems that the Sherangeval is fragmented and that if he collects the other segments of the rod, it will help him find it. Ghamalso believes it lies so far away through outer space that normal means of travel wouldn't be sufficient enough to reach it, therefore a means of psychic entanglement is sought after and thus he has recently focused on adding any items or creatures that possess any odd psychic abilities, especially those relating to dreaming. He even thinks that the realm he's glimpsed within his own dreams and nightmares is actually Thon.

Ghamalso had recently learned that others have also become aware of Thon's existence, especially those along the surface of the Earth, where a figure named Queen Whenith Sarromere from the Kingdom of Iscobal came the closest to finding it. He hopes to reconstruct the collection that she once had, prior to her exile and eventual death. Lastly, it should be known that Ghamalso loves showing off his collection just as much as he loves collecting in the first place. Anyone who's particularly skillful at flattery can go a long way with Ghamalso by complimenting his vast collections. [2]

The Menagerie is, in fact, the larger form of an artifact called an "instant moonlet". Ghamalso is able to mentally control and manipulate this object, allowing him to easily move around modules throughout the interior to whatever configuration he so desires, however, the process requires his full concentration. The simplest he could do is to command an exterior wall to open for the arrival of new visitors. This wall will usually lead into a prearranged salon, though a holding chamber undergoing the conversion process of being a new exhibit wouldn't be an unexpected destination. A large portion of the Menagerie's interior space is dedicated primarily to Ghamalso's vast collection, with only several smaller modules being used for guest rooms, entertainment (i.e. the salon), food preparation, staff chambers, testing labs, and even a private study where notes and maps that may towards things of special interest, such as Thon.

Due to the absence and lack of need for a control room in the menagerie, Ghamalso tends to keep diagrams of various worlds and systems throughout his private study, even retreating there when the time comes to manipulate the configuration of his interior. When it comes to moving around the entire vessel, however, he instead mentally calls upon the power of a god-like otolin named Eurynomec. In return for freeing her from her ancient prison, Eurynomec can use her vast abilities to instantaneously transport him around the solar system, up to a few times each year.

A small unit of Zhev automatons that were collected from Qi can also be found within the menagerie, in addition to usual otolin servitor and staff member. While they answer directly to Ghamalso, the latter is aware of their optional demands to return home and thus treats them all with great respect.[3]

The collections themselves host an enormous variety of items, artworks, and even creature specimens (many of which still kept alive but in suspended animation). Located in a labyrinth of endless halls filled with tasteful lights, each collection features its own plaque, recorded message, or even an accompanying otolin curator. Overall, the menagerie hosts over 50 different collections, alongside a transdimensional, zoological preserve, located in a side dimension presumably larger than the Earth's surface area. With several billion objects being housed within the collections, one could spend a century looking at each object for one minute would only see about 1% of the entire stock. It's even advised that one be accompanied by an otolin docent at all times to avoid getting lost.[4]

The Sherangeval is a term that Ghamalso uses for an artifact known as a singularity drill. [5]

The language that's written onto plaques and recorded within messages at the Menagerie is actually the Truth. This could provide some valuable information as to Ghamalso's origins. [6]