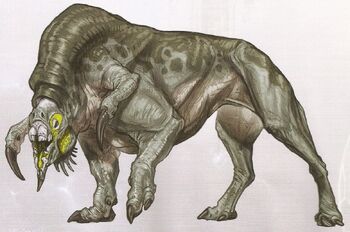 Terredel are beasts with psychic powers. They are native to Naharrai.

"Vanished like a terredel" is a typical ellaticurid saying which refers to something that disappears quickly and unexpectedly.

Running across the grasslands of Naharrai, a pack of terredel can be quite a terror to behold. These predators hide among the tall grass and burst out to bring down prey too slow to escape. In addition to their savage attack, they can cloud a foe's mind, making them seem to be attacking from behind or to the side, even as they lunge from straight ahead.[1]

Plains and hills of Naharrai

Runs and jumps as level 5.

A terredel will leap to attack with its mandibles. Against more challenging prey, however, the creatures attack in pairs, making a single attack roll as a level 5 creature that inflicts 6 points of damage.

Each terredel also has an inherent psychic ability. Moments before it bites, it strikes its prey with a mental assault (all part of a single action on the part of the terredel), which will make the target believe that the attack's coming from a different direction. If the target fails an Intellect defense roll, the difficulty of the Speed defense roll to dodge the attack is then increased by two steps.

It's rumoured that a few ellaticurids have learned to master terredel, training them to be companions, guards, and even hunting animals.

A sudden cry for help comes from the deep grass. If the PCs investigate, they'll find a lone, ghru beset by a pack of terredel. If rescued, the ghru will take the characters back to his community so they can be rewarded.

A terredel brain contains a chemical compound. If properly treated (a difficulty 5 task for someone with experience or knowledge of such things), the compound can be used as a cypher that restores 4 points to one's Intellect Pool.[2]