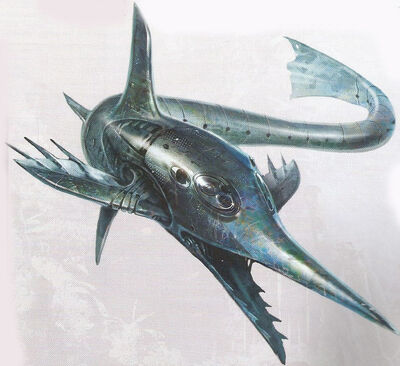 These aquatic automatons are vaguely fish-like and could be mistaken for such at a distance. However, a close view of these device-studded creatures makes it clear that they're animate machines of the deep sea. These creatures are 9 ft. long on average, though individuals can vary greatly in overall form.

Taraken ( also called "ironfish") school in complex geometric patterns that defy explanation by most observers. They don't seem to be chasing prey, following diffusion gradients, or creating a pattern to evade predators. Instead, it seems like taraken are pursuing some ancient directive that can only be played out in three-dimensional aquatic movement. Some people believe that if one tracked all the patterns created by a particular school of ironfish, deeper meaning would become evident.[1]

Swimming almost anywhere underwater in schools of six to ten.

Tasks related to crating and deciphering complex patterns as level 8; Speed defense as level 3 due to size.

A tarak bashes an opponent with its iron flukes. A tarak can also extend a metallic antenna and prduce a brain-dampening pulse. With this device, it can attack up to five selected targets within short range, dealing 5 points of intellect damage (ignores Armor) to each. The tarak can generate this pulse no more than once per minute.

Some ironfish also incorporate a few random cyphers into their bodies and can call on those abilities in combat. The most common is a level 5 detonation cypher that torpedoes up to a long distance before exploding within an immediate radius.

Taraken usually ignore other creatures but will defend themselves if attacked. A creature able to talk to machines can strike up a conversation with a school, during which time it learns that the ironfish are sentient, but only in groups of six or more. Ironfish won't reveal the reason for the complex patterns they swim.

A school of taraken swims into a recently collapsed sea cave where cleoid artifacts are stored. They're immune to the influence such artifacts can exert, and one or two ironfish incorporate those artifacts into their bodies. After that, they leave a trail of cleoids in their wake.

Taraken are interested in devices and machines, and they may decide to liberate such objects from other creatures if an interaction goes poorly.