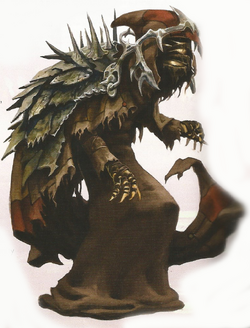 Tabanid are cloaked humanoids who feast on the power and substance of structures across the Ninth World.

On the outside, a tabanid is a humanoid creature cloaked in mystery and several layers of material, over which is draped a trailing cloak of synth, shaped drit, and fused metal. Beneath it all (but connected by a sticky nerve tissue) is an insectoid with the ability to drain both power and substance from both objects and structures. Excess power makes its skin shine like a glowglobe, though most of that light is contained within the layers that wrap it. Excess inorganic material is mostly discarded as dross, though portions of what it absorbs become worked into the layers it wraps itself in or into the cloaks that trail it. The more elaborate the cloak, the more richly a tabanid has fed recently.

Tabanid are intelligent, but are rarely found together - only when they meet for an exchange of information and mating, usually in the belly of a structure large enough to feed a whole tribe of tabanid for years to come. But tabanid prize novelty, so they never stay in place for long, preferring to sample the taste of places they've never visited before.[1]

Tabanid can animate their long, trailing cloaks to become additional, deadly "limbs" in combat, thus giving them a reach of 20 ft. and allowing them the option of grabbing and holding immobile foes they strike. If a grabbed target fails a Might defense task, they can do nothing until they can escape on a later round.

In addition, a tabanid can also absorb worked materials ( which includes drit) by touch, healing itself for a number of points equal to the level of the material or component. Mundane materials provide one point of healing, synth provides 2 points, synthsteel 3 points, etc. If a tabanid holds its action until it's attacked, it can absorb a physical object made from these materials (such as a sword, arrow, or cypher that touches it) if the attacker fails a Speed defense task.

Tabanid are eager for stories of faraway places, news, and maps. Characters can negotiate with one instead of fighting in some cases, though a hungry tabanid can be stubborn to convince.

An odd traveler has come to the community and secured accommodations. The traveler is rarely seen outside their room, and when they are, they're always covered completely in clothing. Around the same time, installations within the community begin to malfunction.

Sometimes a rare component or even a cypher or two can be found stitched into a defeated tabanid's layered cloak.[2]