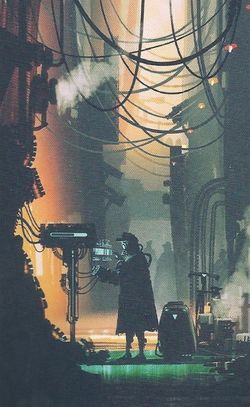 Surynx is an artificial dimension filled with cyphers and artifacts.

An artificial, limited dimension called Surynx "moves" through the multiverse. Transdimensional portal mouths may unaccountably deposit users in Surynx. These transient connections can last a few days, but sometimes only hours or even minutes, which can easily strand visitors in Surynx.

The entire dimension seems to be the interior of some vast metallic structure suffused with dead or only partly functioning components of ancient technology. Residents include an eclectic mix of dimension walkers from hundreds of different dimensions who accidentally found themselves in Surynx. After staying too long, they found that the single gate hosted in Surynx connected to a wholly different dimension. Rather than risk becoming doubly stranded, they instead stayed, joining other, older residents eking out an existence in the artificial space.

Surynx is an excellent place to scavenge for oddities, cyphers, and artifacts, which is why those who've taken up living in the dimension are able to survive. Devices that create food-paste, water, health, air, and other needful things can be found or crafted by those with enough skill. The community that's risen up over the years isn't centralized , but could instead be summarized as a collection of misfits, loners, and hermits who only rarely interact, and then usually with ill will.

A cantankerous automaton named Davarn is particularly capable when it comes to finding salvage, people, or answers throughout Surynx. Some of the others even believe Davarn could actually "pilot" the dimension so that its gate mouth connected with a selected dimension, if it wanted to. But Davarn obviously doesn't want to. Instead, It's fully engaged in a years-long effort to flush an entity composed of energy called Xaho out of the walls. Davarn is reluctant to explain why, but with some cajoling characters might learn that Davarn and Xaho had a falling out long ago, and Xaho retreated into the depths of the limited dimension.

Characters who try to help Davarn may get aid in return, even if Xaho isn't found. (in fact, Xaho may be long dead, as PCs who spend long enough investigating may discover.) But if Davarn is dealt with just so, it can help the PCs deal with other, less-friendly residents of Surynx. It may also finally reveal that it can connect the PCs to the dimension where they actually want to go.[1]