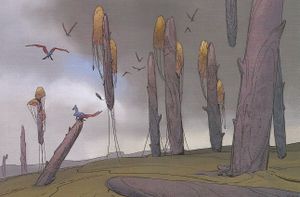 The Stone Trees are enigmatic structures that lie on the surface of the planet Naharrai.

No one really knows where they come from, or if they date back to mythic days from when Naharrai was a dead world, even if they came about somehow afterward, but 128 immense stone pinnacles rise up at the edge of the Baharail Sea. They range from 600 - 1,000 feet in height, and each is 80 - 100 ft. in diameter. Natives refer to them as the Stone Trees, and with good enough reason - as they appear to be the trunks of enormous trees. They even have occasional protrusions that could easily be where branches once connected. However, these structures are made from stone, not wood or even petrified wood, which raises the question as to whether they're natural, whether some intelligent hands crafted them, and whether or not the resemblance to trees what intentional, if so. No one alive knows for sure.

To make the trees even stranger, they're apparently honeycombed with open veins filled with air ripe with helium. In various places throughout each pinnacle, vents allow the helium to escape into the open air. Some of these passages range from 5 - 8 ft. in diameter, but most are actually smaller.[1]

About 1,000 ellaticurids have taken to living within the Stone Trees, dispersed throughout the many pinnacles. They live in side of wooden structures built into their sides, utilizing huge clothed sails buoyed by helium escaping from the vents to ensure that there homes will never fall. The treehomed, as they're called, are excellent climbers and dislike spending too much time along the ground. They gather food from plants and lichens that grow on the stone trees and hunt birds and any other animals that make their homes there. Still, however, they must return to the ground to collect water (although they do attempt to catch rainwater whenever they can). These trips to the ground sometimes involve procuring food and wood, among other needs. They're a practical, quiet people, who live in small groups and contend with great challenges.

The treehomed are insular and distrustful of outsider from any race, although unlike others of their kind, they aren't immediately hostile towards ghru anymore than they are towards anyone else that comes their way. Even so, most ghru are still hostile towards them.[2]

Some explorers and daredevils have attempted to plumb the depths of the Stone Trees using the tubes and passageways, wearing various kinds of breathing apparatuses to prevent asphyxiation from the helium-rich air.[3]