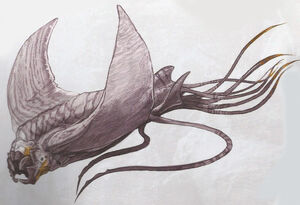 Stinging cloaks of all sizes and colors swim with two or more wide wings. Most cloaks are benign, but one of the largest varieties is a predator sporting several stinging tails A stinging cloak's body is more than 16 ft. from wing tip to wing tip, and is perfectly shaded to blend into its watery environment as it stalks prey. When one attacks, the stinging tails lash like a nest of disturbed snakes. Otherwise, the tails trail placidly behind the stinging cloak as it flaps through the deeps.[1]

Perception and stealth as level 6.

A stinging cloak is usually a lone predator whose many stinging tails are especially venomous. An attack with the tails inflicts 5 points of damage and transmits a paralytic poison that inflicts 5 points of Speed damage if the victim fails a Might defense roll. Worse, the poison continues to inflict 1 point of Speed damage per round until the victim succeeds on a Might defense roll.

The stinging tails constantly lash. Anyone coming close enough to make a melee attack on a stinging cloak suffers 1 point of Speed damage on a failed Might defense roll. Likewise, when the cloak attacks a foe, if the attack misses, the target still takes 1 point of damage from one of the lashing stingers, though it doesn't manage to inject venom. (If the stinging cloak's attack hits, there isn't any additional damage from the lashing tails.)

The stinging cloak is a predator with animal-level intelligence. However, if a cloak is birthed and raised by a skilled trainer (the creatures are live-birthed, not hatched from eggs), it can be trained to guard and serve as a companion.

Sometimes two or three stinging cloaks hunt together. A less expected encounter would include a stinging cloak and another creature that the cloak is guarding or accompanying. This could be as simple as a human fisher whose boat is guarded by a stinging cloak when she takes it out each day, but it could include creatures that have an improbable alliance with a cloak.

A defeated stinging cloak has a venom sac that some intelligent creatures of the ocean prize.[2]

A colony of stinging cloaks trails after the constantly moving Skelliroth fleet, hunting both heeldra and the human traders and fixers who move between dredges.