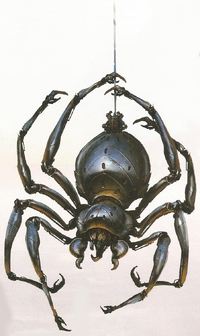 Steel Spiders are metallic arachnids that weave thin webs as strong and as sharp as steel.

Steel Spiders are creatures of living metal that spin incredibly thin webs also made of metal. When Yvaras the Jack and her companions explored the Callostrin, an ancient machine-complex buried beneath the sands of the Cold Desert, she encountered a nest of steel spiders and had this to say:

"We had a glowglobe to light our way. Suddenly someone says that they see something sparkling right in front of me. In the light, right? I stopped right off, and if I hadn't, I wouldn't be telling you this now - I'd be in three or four pieces on that floor. See, I reached out with my dagger to touch what it was. Just a few strands of spider web stretched across the walkway. That's all, right? Except touching it with my dagger cut into the blade a half inch. A good iron blade, ruined! That's how sharp and strong those things are. I turned around to tell Naeris, but then he says, 'It's shaking!' I turned back to see a spider glistening like silver in our light. It was the size of a dinner platter, moving along two of them thin little strands toward us! Good thing we had that heat-cutter that Julran found. We used it like a weapon on the spider as it approached. One blast with that drove it off, and we got outta there. Naeris said that as we left, he saw more of 'em. A whole network of their webs strung everywhere. I don't want to go back there anytime soon."[1]

Living in small nests of three or four, steel spiders spin their webs in dark ruins, subterranean locales, and wilderness areas of any climate.

Balances and climbs as level 6

Steel spiders attempt to ensnare their prey inside their webs. However, the webs themselves aren't sticky - they're razor sharp and easily cut through any material (including flesh) lower than level 5, inflicting 4 pints of damage. The strands are so thin that it's easy to stumble into them by accident. An Intellect task (level 3) is needed to see them in time. Severing a web will require at least 2 points of damage from either an energy attack or from a blade higher than level 5.

If the webs don't kill the prey immediately, the steel spider will then move in to attack with its bite. The creature's spinnerets are located within its mouth, and a bite will inject the victim with metallic strands. Victims who happen to fail a Might defense roll take 4 points of Speed damage that ignores Armor as their muscles and tendons are torn apart by the invasive injection. This damage is in addition to the normal 3 points of damage from the bite.

Interaction with steel spiders is nearly impossible because they think only of eating. Although they're organic creatures, they operate almost like machines.

While wandering through an ancient complex, the PCs find a hatch in the floor, which leads to a shaft going down. Butt canny eyes might see that the shaft is crisscrossed with thin-silvery filaments. The explorers will have to figure out how to get down the shaft without being cut to ribbons.

If very carefully cute and stored, the web strands from a steel spider can be used as deadly garrotes or even as cutting tools[2]