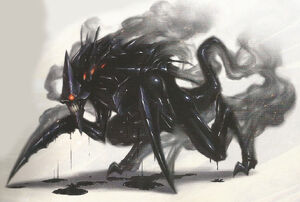 Stalking Shades are shadowy creatures that hunt from another dimension.

Stalking shades never fully appear with the dimension that they hunt, but instead project their shadow. Thus shades appear similar to the regular shadow cast by a nearby object or a creature being stalked, making shades hard to identify as anything dangerous. However, when someone one or more stalking shades are about ready to pounce. Victims are pulled into the dimension where the stalking shade's true form resides and are then consumed.

Stalking shades move across the dimensions, but are often drawn to locations where the fabric between worlds is at its thinnest.[1]

Almost anywhere, either alone or in groups of four

Tasks related to stealth as level 6.

A stalking shade relies on its deception and stealth in order to attack a victim from ambush whenever possible. Once it attacks, the shade loses the shape of whatever shadow it was mimicking and ten takes on a horrific snake-like (or tentacle-like) silhouette. When a victim is hit by an attack, it suffers 5 points of damage and must succeed on a Might defense task or be partly pulled into the dimension where the staking shade's true physical form resides. A limb or some other part part of the victim's body seems to disappear when this happens. The victim takes 4 points of Speed damage (ignoring Armor) each round it's caught, as whichever lies in that nameless alternate dimension gnaws on the victim, until the victim succeeds on a Might task to break free. A victim who dies from this damage is completely pulled into the nameless alternate dimension, and is gone.

Unless a foe deals transdimensional damage to a stalking shade, killing one will merely dismiss the shadowy shape; whatever cast the shadow in the first place remains unharmed, though it can't cast a shade again into the same location for at least 28 hours.

Stalking shades behave like clever, predatory animals, albeit ones that have the ability to hunt using ultraterrestrial means.

Weird shadows are sometimes seen dancing along the walls of the prior-world ruin located nearby. When locals investigate, the shadows slip away. Except for last week, when three local children went to watch over the shadows and never returned. The village elders are seeking someone knowledgeable about the numenera to investigate.[2]

When multiple stalking shades appear, they might represent a single entity with multiple "limbs" casting its shadow into our reality.[3]