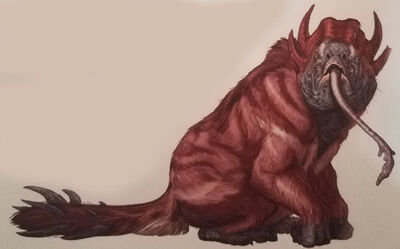 Spawn-Warriors of Ochramaris are hulking creatures that serve their eponymous entity.

Though they often slump and crouch, the pawn warriors of Ochramaris are about the size of a hulking human man. These furry, apish creatures are literally born for combat. The spawn-warriors defeat the enemies of Ochramaris and watch over their master, its territories, and its subjects. They seem to delight in subjugating others, pushing and even striking subjects, especially when it isn't necessary, chortling with deep laughter afterward. They seemingly have developed no more sophistication than that.

If somehow removed from the relative proximity of its sire, a spawn-warrior would become catatonic for a few days. Eventually, however, it might develop its own capacity for free thought and determination. But that still remains a theory.[1]

Never more than 10 miles from Ochramaris

Spawn-warriors are tough, agile fighters that can inflict horrible wounds with their muscular hands, but that is the least of their inherent dangers. Their tails are barbed and envenomed, inflicting 1 additional point of Speed damage wherever they strike. Even worse, however,m is the touch of their bizarre tongue to organic flesh. Those struck by said muscle won't suffer any immediate damage, but wherever their flesh came into contact, will transform into a brief mist of crystalline fragments after one round. At this time, the victim will suffer 5 points of damage. If the spawn-warrior's still within immediate range, it can inhale some of the fragments and draw energy from them, adding 1 point to its health (even if undamaged).

Each round, a spawn-warrior must choose one of its attacks to use as its action.

The spawn-warriors receive frequent telepathic messages from their sire, and they can likewise reply ( however, they can't initiate the communication). Thus, if Ochramaris is alert and inquiring among its spawn, it can thus communicate through them. The spawn-warriors can speak in a halting, guttural manner, but only if their master tells them what to say.