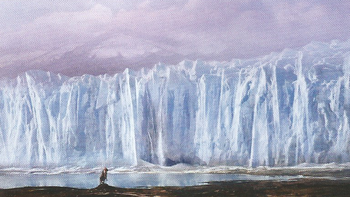 The Southern Wall is a large, icy geological feature in Matheunis.

Bordering the southern end of Matheunis is the Southern Wall, a glacial formation of nigh-impassible peaks and sheer cliffs. Surrounded by frozen lakes and often covered by snow and hailstorms, the wall seems less a product of its environment than the other way around. In fact, some people speculate that the wall is what generates the bone-chilling conditions that infuse everything inside the Cold Desert.

Those who brave the deadly freezing air to approach the Southern Wall report that the temperature drops rapidly with every step. The sharp retort of creaking and cracking resounds constantly from deep within the ice.

Some believe that beyond the Southern Wall, there lies a hidden city secluded within a rift in the massive glaciers that consume the region. Rumors say that this city, if one can reach it, in uncannily warmed in some fashion, a sort of secret paradise.[1]

Those in the north see the Southern Wall as a seemingly impassible barrier of ice, but it's possible there are others on the southern side who view it in much the same way. The wall is, in fact, honeycombed with ice passages and caverns for those who have the expertise and courage to find them.[2]