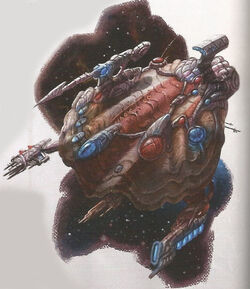 Sorg Warbreakers are soldiers for the Sorg species.

A sorg's massive bivalve shell is twice as large as a human being. Normally closed, the shell is encrusted with tech items (including levitation devices), weaponry, and decorations denoting the individual's grand achievements. When necessary, dexterous manipulator tendrils will squeeze out from inside the closed and pressurized shell.[1]

Immediate; long when flying or in microgravity

Speed defense as level 4 due to size; knowledge of tactics and strategy as level 6.

The average sorg is equipped with shell-mounted weaponry that's able to target foes at long range with detonations that inflict 5 points of damage to the target and all other creatures within immediate range. alternatively, a sorg could attack a single foe within long range with a ray that paralyzes the target for about a minute, which is useful for capturing enemies and live food. High-status sorg usually have more potent weaponry mounted on their shells.

Usually, the only time a sorg will open its shell is to eat a paralyzed, but still living creature. Sorg encountered within the empty void are often in command of advanced space vessels.

Even among their own kind, sorg don't recognize an inherent right to happiness, freedom, or even life. All of these must be earned, and the weak pay the ultimate price. So even though sorg have translation technology built into their shells, negotiating with one will be difficult. However, if outsiders can win a concession from a particular sorg, it's usually good to its word. Other sorg, though, might feel differently.

A sorg vessel claims salvage rights to a site that the PCs are currently exploring. It claims those rights by dint of sending in a sorg battle company to clear out the characters and any other means of resistance.

A sorg shell can be salvaged for at least one cypher and sometimes an artifact.[2]

An open shell reveals the true form of a sorg: a mass of muscular tissue supporting a beaked mouth frilled with many tendrils.[3]