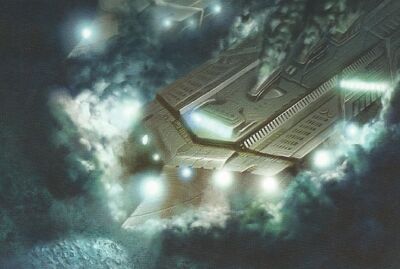 The Skelirroth Fleet is a fleet of large, automated undersea vehicles.

The Skelirroth Fleet is specifically composed of 5 supermassive dredging vehicles that scrape along the sea floor, clearing it of any bottom-dwelling creatures and extracting whatever resources they can for their centuries-long mission, whatever it may be. Each vehicle wields massive blades that are lined with intakes, creating large furrows along the ocean floor, as a result. Behind those tools, they're also armed with a pair of powerful treads.

The Skelirroth Dredge is largest of the fleet, with four smaller ones tagging alongside it: the Iselkorm, the Zyeburn, the Berambus, and lastly, the Yarvanax. They all travel from shoulder to shoulder in a widely spaced line formation, each about 300 ft. from one another. Meanwhile, much smaller underwater automatons float in thick swarms and help conduct repairs to the exteriors of the moving Dredges, thousands per minute, in fact. Anything the fleet comes across is immediately scrubbed of all life.

The Skelirroth Dredge, also known simply as Skelirroth, is seen as a mobile nation and has been that way for several centuries. However, each dredge has developed its own culture and the need for trade of useful items has facilitated connections between them. For the most part, its natives have no control whatsoever over the path that their home takes. Despite their efforts, the fleet hasn't unified itself under any particular group. The inhabitants of each dredge are also unaware of who or built the dredges, what damage they're doing to the areas around them, or even that their in an artificial, mobile environment at the bottom of the sea, at all.[1]

All of the Dredges are filled with confusing metal corridors, chambers and rooms, many of which one can breath inside. The Three-dimensional interior surface area for each, overall, is considered to be larger than many of the largest cities across the Ninth World. However, due to their incredible age, the vehicles tend to break down every now and then, sometimes in big ways, other times much smaller. Legions of maintenance automatons from within the structures help keep each dredge from completely falling apart from the inside, constantly at work due to the dredges' continuing operation, though some human inhabitants also help out the automatons in keeping their homes in as a good state they can.

Even though every dredge within the fleet extracts from the ocean floor hundreds of usable resources like energy or food, only about 1% of the extracted materials is processed, with the rest completely disposed of. While this may have to due with the constant malfunctions each dredge experiences, the original design of each dredge is considered to be the largest contributing factor. An unpopular organization amidst the dredges, known as the Abersheen Cult, claims that if a dredge could be optimized to even 1/5th of its true potential, the resulting food and energy that it would provide could sustain everybody within the entire fleet, even providing massive additional bounty, as well.

Any sea creatures from outside the dredge that are caught within the approaching clouds of automatons are usually directed toward the bow, even though if any creature is within long range of a dredge's primary orifice along its wedge-like bowl could accidentally be drawn in and consumed. These creatures would have to make a Might defense roll or risk being sucked into a series of large, gnashing teeth from along the harvesting intake, sustaining a total of 15 points of damage every round that they're caught. Once caught, they would then need to make a Might defense roll of at least 6 in order to swim free. Any and all creatures that don't survive the encounter end up be processed like any other material throughout the machine.

Within a given 30-day period of time, there's a possibility that one inhabited corridor or even compartment will become flooded with water. Because of this, many residents carry with them objects called rebreathers, or at the very least know a guy who sells them. The Fixers Guild, the fleet's finest craftspeople, are responsible for the creation and maintenance of these devices.Vermin or even rogue automatons are also an ever-present danger on the dredges. Most of the human inhabitants also carry with them weapons like the common spike jet. If not, again, they might know someone who does.

Many of the people that reside within the dredges have spent their whole lives there, with communication between the outside world instigated by foreign explorers. Those that spend their lives within the enormous edifices are either insular by nature or often to too caught up in ensuring their own survival to even consider leaving their home. Any and all foreigners, saboteurs, or even invaders who wish to disrupt the fleet's movement are usually brought toward the main community center of the vehicle in which they were found and judged by the appropriate authorities. Natives will normally stick to their own dredge, with travel to another facilitated only by the Traders' and Fixers' Guilds. Both groups control all the air locked entrances of the dredges and also keep a store of rebreathers and even relayers in various states of repair. While those willing can probably find their own exit from their dredge, most are willing to contract one of the two guilds to arrange safe passage.

The inhabitants of each dredge speak their own unique language, with any one of them further splintered into multiple dialects. Of these tongues, 2 trade languages vie for dominance: Mearam and Naush. The best of traders throughout the fleet will make sure to know both, alongside the more important languages of the fleet, such as the eponymous Skelirroth language. Among these varying tongues, the one from Zyeburn displays fragments of the Truth in its structure. This suggests that at some point in the past, the people of Zyeburn had made contact with the people who would eventually spread out across the Beyond and the Steadfast. Consequently, one who's well versed in the Truth could be able to communicate basic concepts to a Zyeburn resident.[2]

· Slimes: - Prolific, mobile, emerald-tinged slimes that hunt vermin across the dredges by dropping on top of them.

· Eckals: - Very small, red, fish-like creatures that move in swarms down the corridors of dredges. They've developed a taste for the human inhabitants.

· Growlers: - A prolific type of fungi with mushroom heads that resemble a snarling beast. They can grow to amazing heights within spore forests. Though, in regular compartments throughout a dredge they usually grow to only arm height. Unfortunately, they can also bite anyone nearby, injecting the victim with poisonous spores.

The Greatest infestations of fungi throughout the dredges have unfortunately been routed around by the maintenance automatons, leading to the creation of spore forests. These new environments take over abandoned compartments of dredges and host a variety of dangerous plant and animal life, alongside rogue automatons. Some human populations also live within spore forests, completely unaware of the fact that they even live in a giant underwater vehicle.

A bunch of flora and other materials from outside the dredges is automatically processed into useful goods for the use and consumption of their human inhabitants. Each type of produce is generated from vats or taps, with the most significant defined below:

· Farrac: - A semi-solid, edible gel that used within foodstuff bricks that a dredge's food vats produce. The taste they provide is often hard for foreigners to describe.Meanwhile, the natives love it and have prepared thousands of recipes for it, including pudding.

· Pure: - A term used by natives for any clean, water that doesn't contain salt. Seen as a commodity among the fleet, the taps that produce it are even more heavily guarded than food vats.

· Arak: - While the taps that produce this liquid are similar to those for the pure, arak is actually an alcoholic beverage that's prized by the Fixers' Guild. Other people seek it out it in order to gain a state of inebriation.

· Saya: - Various colored synth fabrics from which clothing and other objects can be made.

· Wire: - Coils of metallic wire, are produced in various lengths.

· Tuc: - A grey film that's adhesive on one side. The material is often used for crafting or repairing items and objects and is even prized more than wire by the Fixers' Guild.

· Kandu: - A hard produce that's bright red in appearance and sweet in taste. They're often used to help clear up any illnesses one might have.[4] 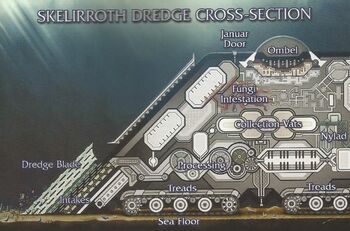 A group of hunters from dry land, known for taking down game much greater in both size and ferocity, have recently learned about massive sea beasts called "skelirroth" that will sometimes party emerge from the waves along the coast. In preparation, they've mounted an expedition to try and take one of the mighty beasts as a trophy when one next emerges.

Dramben Kol, a member of the Traders' Guild, had left the fleet in order to open up trade with the rest of the Ninth World. However, he was not given blessing by the guild to do this and they've since become jealous of his outing. A retrieval team of specialists have been sent out to capture Dramben, dead or alive.

The Berambus, the third-largest inhabited dredge of the fleet falls further and further behind than the rest. It also leaks toxic sludge into not just the surrounding water, but also its own interior compartments. If something isn't done to prioritize the dredge's maintenance and fix this situation, fast, the dredge and everyone within will be lost.

On occasion, a human fleet will swear to have glimpsed a sixth dredge following alongside the other 5 of the Skelirroth Fleet. No sixth dredge has ever been recorded and, thus, this "ghosts dredge" has been marked as a hallucination or children's tale.

There are winds that blow throughout compartments of a dredge, smelling of either oil or fungi. Alongside this, a scratching or tearing sound can be heard just below the wind's whine. Whenever those sounds are heard, a stench of rotting meat and blood mixes with the previous odor, causing many residents to hide within their compartments.

In addition to produce like the farrac, kandu, tuc, etc. the vats and taps of the Berambus also expel weird objects that can be used like cyphers, each possessing seemingly random abilities.[5]

Fanciful stories are told along the creaking corridors of the dredges regarding their creation. The stories tell of a strange people whose arms are like that of an octopus, a people who built the entire fleet ages ages ago. It was so long ago, that all that remains of them is a single word: Calram, and an ancient promise that they'll return once the dredges are all full.[6]

A few dredges are known to contain much smaller craft that are nestled within protective chambers. Despite the fact that they're small, noisy, and smelly, the humans that come across them treasure them greatly, since they each offer the chance of escaping the fleet forever.[7]