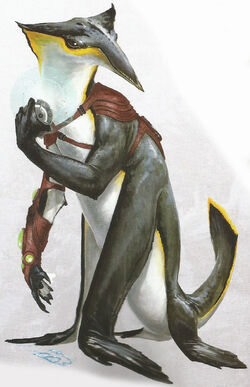 Skeane are an intelligent race of aquatic creatures native to the underwater City of Rust.

Skeane are furred, feathered, webbed in colors of grey and white, with stripes of orange-yellow around their faces as well as along the edge of their bellies. Their heads look similar to an amalgamation of a dolphin's and a bird's, featuring soft pointed bills, mall teeth, and long tongues.

Skeane are known to possess 3 sets of multipurpose limbs. While on ground, they use the 2 posterior pairs for standing, and the anterior pair like human forelimbs. Whenever they swim, however, they use all 3 pairs, alongside their kite-shaped tails, allowing them to zoom throughout the water, though they can also deliberately slow them selves down whenever they use their forelimbs to hold or operate any equipment, catch fish, explore ruins, or even build or repair certain city structures. They're known for being very intelligent, dexterous, and otherwise complicated. Reputed as builders and creators, they're always looking for a new challenge.[1] 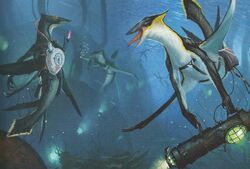 The skeane are known to have 3 genders, each being defined by their roles in caring for their young: egg giver, egg taker, and egg feeder. The givers produce a small orange egg per year, which they'll then pass over to the taker. Takers insert the eggs within their bodies and carry it until it reaches term. Once the egg is ready to hatch, takers will be the ones to deliver. After the young skeane has hatched, the feeder is given the responsibility to raise sit, using digestive enzymes to regurgitate special nutrient-rich food and liquid for it.

Very rarely or twin skeane ever born, but when this happens, they almost always come out conjoined. Extra special care is given to these particular youths, as they're believed to be offerings from their deities. Many skeane believe that if a pair of conjoined twin skeane can make it to adulthood, then the gods will be eternally placated. However, most twins tend to die just before reaching adulthood, as they particularly susceptible to the Drown.

The only visible distinguishing characteristic to tell between the 3 genders lies along the underside of a skeane's tail, each with a certain amount of white nodules. Givers will have 2 nodules, takers 4, and lastly feeders will hold none. Whenever the skeane aren't producing, carrying, or tending to any new offspring, the concept of gender remains absent from their daily life. The skeane are a communal species by nature and often share their lives as well as their living arrangements with 2 or more additional creatures.

Their speech consists mostly of a combination of sounds, air bubbles, alongside hand and tongue gestures. Many, however, also can speak a truncated version of the Truth, thanks in part to small implants that pierce the sides of their tongues.[2]

Ooro is pretty similar to the oxygen-rich "water" that can be found within the invisible corridors of the City of Rust, leaving many to believe that the two substances might be related. [3]

Whenever the skeane say the term "ooro," it's soundless, like more of a bubbling gesture of the mouth than really a sound at all. It's actually onomatopoeic, designed to represent the sound that bubbles will make when leaving the lungs and reentering the liquid upon exhale. There doesn't seem to be any translation for it in the Truth, nor any written equivalent. [4]

Most skeane names tend to be vowel heavy, sounding more breath and soft air than any harsh consonants Many tend to be reused often and even passed down through generations. Common examples are "Ooya", "Aawo", and "Uoai." [5]

The number one killer of the skeane is a mysterious disease referred to simply as the "Drown", which they consider to be a curse from Sa. Despite multiple offerings made to the latter and precautions taken to avoid it, as many as a hundred skeane pass away to its effects each year. [6]