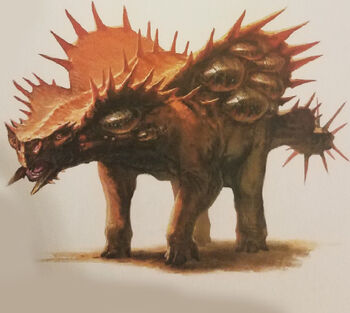 Shoun are subterranean predators that harbor colonies of tiny organisms.

Shoun are part of a super-heated underground ecosystem that includes both much larger and also much smaller creatures, all of which rely on the symbiosis of an energy-phase organism known as vil. In return for hosting vil colonies (which are visible as fleshy blisters filled with tumbling blue sparkles), shoun can withstand extreme temperatures near active magma chambers.

shoun gain their nutrition directly from consuming the flesh of other creatures, and indirectly through their vil-filled blisters after periods of exposure to intense heat. On the whole, shoun will prefer meat to heat, and they are amazingly quick despite their bulk, which can reach up to 30 ft. from snout to tail.[1]

Hungers for flesh and heat

Speed defense as level 5 due to size.

A shoun's primary means of attacking is a spiked tail lash at a single target or made as a spinning attack against each target within immediate range that will deal 4 points of damage.

Additionally, a shoun can attack by willing one of its vil-filled blisters to burst. When this occurs, up to two creatures standing next to each other within immediate range of the shoun must succeed on a Might defense roll or suffer 4 points of ambient damage as the blue lights burrow into their flesh. Such victims will then be infected by a vil colony.

Establishing long-term symbiosis with colonizing vil is dangerous even for organisms bred for that specific purpose because vil colonies that are native to one creature naturally fight vil colonies infesting another creature until equilibrium is achieved. For a character from the surface, a vil infection manifests as a disease that deals 4 points of ambient damage each day until the host succeeds on a difficulty 6 Might defense roll to throw off the infection. While infected, the host enjoys +5 to Armor against heat and fire damage.

A shoun is a predator that rarely turns up the chance to eat fresh meat.

A journey through a magma chamber near an ancient numenera installation is interrupted by the appearance of a hungry shoun.[2]