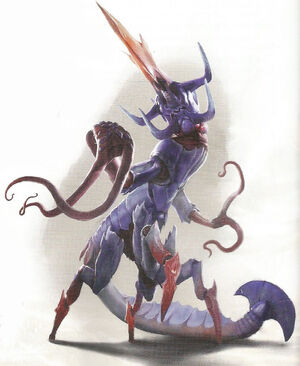 Shataraks are deadly monsters that travel between dimensions.

You can't see it, at least, not at first. But you can feel it, rumbling through the levels of reality that you never knew existed until this moment. Something is smashing the barriers that normally keep alternate realities separated, and once it finally appears, it's revealed as unbelievably massive.

A shatarak - also called a "realm crasher" - stands about 30 ft. tall. Realm crashers usually appear only within areas where transdimensional effects are in use, including phasing. They seem intent on destroying the entity or device involved in creating the effect, though that might be a side effect of their true, unknowable purpose.[1]

Destroying any creatures and devices that allow transdimensional travel

Long; can transition between dimensions as an action unless attacked

Speed defense as level 4 due to size.

A realm crasher attacks with an impressively large tail that can target up to 4 creatures with only a single attack.

A realm crasher can also attempt to cut a furrow in reality that siphons energy from within cyphers and artifacts. When it attempts to make such a tear, it moves up to a short distance in a round, and anything it comes within immediate range of is attacked. Each target must make a Speed defense roll, or one cypher (or, if they have no cyphers, an artifact) on their person is drained of power. Devices that have some kind of transdimensional effect are drained first. If the targets don't carry any devices, this attack will have no effect.

Shataraks can sometimes be bribed with numenera items that have any transdimensional effects, but they're generally not interested in other kinds of interaction. They speak their own language of subsonic whistles and clicks.

A Nano got lucky and captured a realm crasher, and is using the beast as a subject in experiments related to crossing dimensions. Meanwhile, reports accumulate from nearby villages of a rampaging monster of enormous size that is there one minute and then gone the next.

A shatarak may have a few cyphers and even an artifact, but usually only because it had yet to destroy them.[2]

Realm crashers are rumored to have once been peaceful creatures, but following the destruction of their entire plane in some kind of dimensional mishap, they became vengeful, looking for something called "the Key."[3]