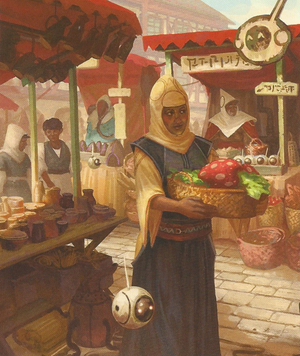 Shallamas is a mercantile city in the Kingdom of Navarene.

Known by many as the City of Echoes, Shallamas is a sprawling trade city of 80,000 people, as infamous for its thieves as for the wealthy merchants they prey upon. It's home to the Provani family, another of Navarene's aristocratic houses. The Provani garner great wealth from the caravans that enter the city with goods from the south and leave with goods from Navarene and the Beyond. Even exotic goods from the mysterious lands to the north, such as liquid silk and synthwood, flow through Shallamas.

The City of Echoes is surrounded by an impressive stone wall with many towers. Three main gates provide access, each with its own associated market, and a fourth market lies in the center of Shallamas.

The city gets its name from a strange phenomenon that has no explanation. Without warning, residents from time to time see and hear "echoes" of recent past events. although these echoes seem real, they're more like illusions or holograms, you can't interact with them. The events can be as recent as a few minutes ago or as distant as a year in the past. In th Shallamas court system, an echo of an eyewitness observing a crime or confirming an alibi is every bit as valid as seeing it actually happen. Echoes have never been observed with inaccuracies.

Argust Provani, the ruler of the city, employs a capable and sizable guard to maintain order, but he also controls an elite group of secretive operatives called the Shadowlings, who infiltrate criminal organizations and destroy them from within. The Shadowlings are though to be as ruthless and violent as the criminals they combat, but they do help to keep the city's merchants and traders safe from thievery.[1]