Shadow of the Void 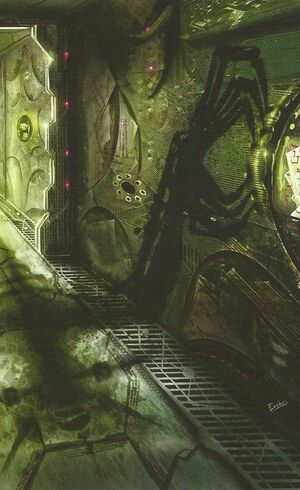 Shadows of the Void are dangerous, shadowy creatures designed only to kill.

A shadow of the void is an entity built for assassination, which means it usually appears only as a shadow cast on a surface, if it's visible at all. When visible, the shape might resemble a human, an otolin, a kruem, or an immobile object or piece of equipment - whatever's least likely to rouse a victim's suspicion.

Shadows of the void have become more common in the Ninth World since explorers began returning from trips into the night. To the Aeon priesthood, this suggests that the shadows are something like vermin infecting the void overhead.

Almost anywhere within the Phaeton Halo

Tasks related to deception and stealth as level 7.

A shadow of the void uses stealth to its advantage. If it successfully attacks a creature that wasn't aware of its presence, its touch will deal 9 points of cold, energy-sucking damage. Thereafter, it will deal 5 points of damage per successful attack.

The shadow can also direct an energy-sucking ray at a target within long range that inflicts 5 (or 9) points of damage, but if it fails to hit any creature, this attack will drain the shadow of one point of health.

In either dim light or darkness, a shadow of the void uses lightlessness as protection and gains +5 to Armor. If forced into bright light or sunlight, it loses this advantage and both of its movement rates drop to only an immediate range per round. For this reason, shadows of the void attack in places that are unlikely to have any bright light or be open to sunlight.

Shadows of the void are intelligent, thinking creatures, but they use their ingenuity for selecting targets, not negotiating with them.

The characters are called to investigate several murders in a nearby city. They discover that a vessel recently returned from a trip into the airless void, and its crew were among the first victims.

The deactivated form of a shadow of the void is a cloak-like piece of synth, which grants an asset on stealth tasks to any creature wearing it.[2]

Otolin stories suggest that the shadows of the void represent active components of a far more deadly entity that once strove against Phaeton, before that object's destruction.[3]