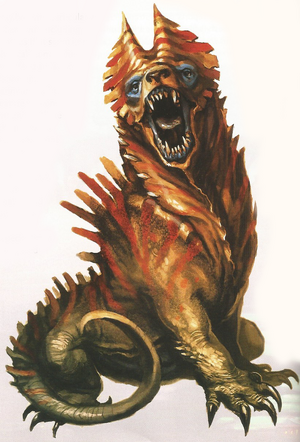 Seskii are large, scaly canines that lie within the Ninth World.

Resembling large dogs in both stature and movement, these four-footed creatures are covered in hard, overlapping scales. The intricate patterns on the scales range from greenish-brown to black and white spotted to the reddish hue of embered coals. From their backs sprout a mass of organic crystals. Standing about knee-high to most humans, seskii have large teeth, pointed ears and sharp, pointed tails.[1]

Anywhere, even in urban areas

Attacks as level 3 if wearing any type of manufactured armor, including a spiked collar, daggered tail cover, or synthclaws. Defends against piercing weapons as level 3.

Seskii typically attack with their teeth and the sharp tips of their tails, although they might also claw or pounce. While the crystals provide armor, their scales provide them with additional protection against piercing weapons.

Seskii engage in combat for of two reasons: hunger or loyalty.

When hungry, they often attack anything that appears edible, including any other seskii. When they attack humans, it's typically to snatch food being carried and race off with it, rather than to eat human flesh.

In terms of loyalty, seskii may become particularly devoted to anything and anyone, including other seskii, humans, statues that seem like creatures, and places they call home. They'll fight to the death to defend a place or person they deem as their own.

If a seskii in the wild is wearing manufactured armor, it means that the creature was once someone's favored companion. There's a good chance that the person is now long dead, as a seskii wouldn't willingly leave their person's side while their owner's still alive.

Intelligent and loyal companions, seskii can be trained in various methods of hunting, stealth, and attack by those who have skills with animals. Many humans outfit their seskii with special types of weapons and armor - spiked collars are a favorite.[2]

Nanos and numenera crafters value seskii crystals as useful components in information storage devices. Occasionally, seskii shed the crystals naturally, but more often, they must be cut from the creatures. Crystal poaching is a common practice.[3]