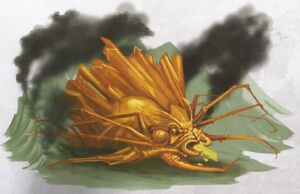 Sasquands are undersea creatures that scavenge for numenera.

Sasquand are encountered mostly in a region of the Inner Sea called the Updwelling. There, they wander in a never-ending search for technological oddities and artifacts vomited up from even deeper in the Earth's core. They tend to slay other creatures who draw near and then return to their prospecting.

If a sasquand is killed, characters within long range must make an Intellect defense roll (level 4) for each cypher and artifact inn their possession, or that device is affected. Usually, the affected device gains a new capability determined by the GM.[1]

The Inner Sea, usually the Updwelling

Knowledge of the numenera as level 10.

A sasquand can morph itself or produce weapons from its body that allow it to make up to two ranged attacks as a single action.

Characters with nano abilities, Who Fuse Flesh and Steel, who are automatons, or who otherwise integrate tech devices into their bodies and find the difficulty of defending against attacks by a sasquand increased by one step. It's as if the inorganic tech somehow resonates with the will of the sasquand. (Organic devices are immune to this effect.)

Sometimes a sasquand decides that characters, especially those not native to the Inner Sea, are not mere looters to be destroyed. In such a case, it telepathically communicates with the characters and asks about interesting items of technology hey have encountered. If sufficiently impressed, the sasquand may spare their lives.

A sasquand frozen into a bock of ice is found floating off the coast and brought to a community for further study. For some reason, the ice doesn't melt and won't break through normal physical force. The characters are asked to help investigate.