Ruxali is home to about 1,000 humans and more than twice as many lux. The city itself isn't a cloud city in the normal sense; it's actually a massive series of platforms and descending towers suspended via a web of synth cables from a perfectly-spherical green object that hangs just above the cloud level of Urvanas. (The sphere and the structures hanging from it obviously hold two different origins.) The floating construct, about 2 miles in diameter, somewhat resembles Aato, though it happens to be much smaller, it doesn't circle the planet, and doesn't hold any green automatons - which may be why several cracks have developed along its surface. On the other hand, both humans and lux wearing gravity boots routinely clamber over it, seeing to the cables and nets that secure the hanging city below. Unlike a cloud city that can repair itself, Ruxali needs to be maintained. And unlike those who reside within a normal cloud city, humans who live in Ruxali must make their own arrangements for breathing. 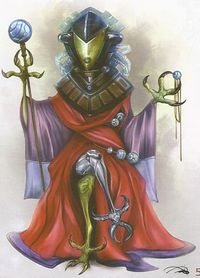 The Covenant of Urvanas is based within Ruxali. A massive lux known as the Harbinger sits at its head. Standing at over 7 ft. tall, covered in long robes from which only a few of its many limbs are visible (including one silvery prosthetic one), and always wearing a head-concealing space helmet, it's clear as far as the lux go, the Harbinger is something of an eccentric outlier. Not that it really matter, however, as the Harbinger has a way of commanding absolute trust in its suboordinates with just a few words of encouragement or censure. Backed by a rowing army of lux and humans who were previously Ruxali citizens, the Harbinger is well on its way to creating a sturdy force of troopers to be reckoned with on Urvanas and eventually, perhaps, even beyond its confines.

Large sections of Ruxali now support the Harbinger's plans for conquest and rely on salvaged prior-world devices to build gravity boots, static force guns, and armor. They will also continually capture windriders and other devices that may provide transport.

Word among the army is that the Harbinger found a crack inside the sphere from which the city of Ruxali depends greatly on. This might explain why it's sometimes observed high overhead on the sphere, dangling from its many limbs. By inserting its machine prosthetic into the crack, the lux leader recently learned to focus light that falls upon the Ruxali sphere as a weapon, a power that seems to grow more potent and exact as time passes.

Usually, the lowermost sections of Ruxali are completely covered by the clouds, which obscure vision beyond an immediate distance. However, when storms lash the strongest, red lights are visible streaming through the vapor, swirling and almost dancing, suggesting the outline of some vast creature. If it's really an outline, the creature's size would be several miles across. Regular cloud cities, which also sometimes dip into the tops o the cloud layer, never report seeing such a similar sight.[1]