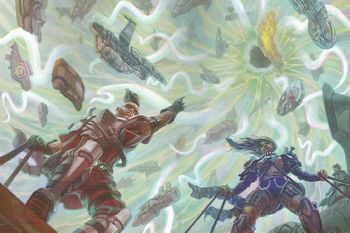 Reeval is an alien dimension almost entirely filled with a writhing mass of intelligent organisms called the Thread. It's also the home plane of any and all things considered Nibovian.

Reeval is a dimension of densely interwoven, living tendrils that writhe like a vast bucket of elongated milk-white worms. Occupying only a tiny fraction of this far-flung expanse are a series of connected, evacuated spherical spaces completely bounded by the living tendrils. The living tendrils, known as the Thread, are the intelligent natives of Reeval. The spherical spaces are where the Thread interface with an experiment on entities harvested from other dimensions. The Thread possess an intelligence that dwarfs human cognition while at the same time failing to understand the phenomenon of individual self-awareness. Thus, the Thread probe into other dimensions using biological constructs grown to mimic other creatures' forms, emotions, and even self-consciousness despite the fact that (or simply because) the Thread don't (yet) understand what self-consciousness truly is.

The spherical spaces - called voids - are different from each other. Some of the voids are wholly given over to crafting Nibovian drones, and others are used to generate transdimensional vortices through which the Nibovian drones are then deployed. Some contain bizarre enterprises that are difficult to describe along human terms. Within these voids, the Thread practice interaction among themselves using puppet-like facades called Thread walkers that are dressed in harvested human skin and clothing.

Most people misunderstand the term "Nibovian." The word isn't meant to convey a place, but rather a process. Creatures that are born with the Nibovian title are artificial drones, probes, and lures that are extruded into the human inhabited universe by incomprehensible, transdimensional entities that fail to understand humanity but who nonetheless desire t=something from them, something that appears to be a transcendent quality. Or perhaps it's far more base - in the same manner that Nibovian creators can't understand humans, it's also possible that humans are just as incapable of determining what the Thread want.

In reality, if the human universe were to be represented as a market stall where a vendor had set up a bin filled with toys, the Nibovians would be the catching pole, the Thread holding them, the toys themselves being all of humanity.

Within the dimension of humanity lies a distant world called Farundiel, where the natives loo like humans despite the common white hair and pale skin. Their tech is as potent as any known ray emitter, detonation, or any other offensive artifact, but is unlike anything found on the Ninth World. This is because their tech is powered by ultraterrestrial energies leaking from a nearby hole in space, which leads to Reeval. Because of said anomaly, Farundiel is just as plagued by the presence of the Nibovians as Earth is, if not more so. Passing through this aperture will deposit travelers into Reeval, specifically a void known as the Gyre.

People can also discover Reeval by simply being the victim of some Nibovian lure (i.e. - Nibovian Guide) that was crafted by the Thread to draw humans into their realm. Though most of the victims would end up dead, a few tend to be kidnapped and then deposited into a void called the Abscission.

Lastly, any methods of interdimensional travel like the Grinder of Infinities or even the Crystal Ship can also work in getting to Reeval, but would most likely deposit dimension walkers into a writhing mass, of elongated, milk-white worms called the Body than in any of its voids. There's not much difference from arriving in the Body than arriving in the Abscission, though its not far from as horrible either.

Several of Reeval's voids do contain breathable air, light, and even warmth, but the much larger mass of the Body is airless and more likely to crush to pulp any non-native that attempts to move through it without any protective shell or vessel of some kind to withstand it. The slowly-writhing tendrils that compose the Thread shine with a faintly-green-tinged white light, which can provide dim illumination everywhere within the dimension.

Gravity does also exits in Reeval, but also not within the Body, which seems more like a sea in structure. Instead, it would be inside the voids, where the sensation of "down" is normal to every sphere's interior boundary. So creatures can move around normally along a surface that's often composed of worm-like loops or braids, while at other times glistening organic slabs or even chitinous paths. Finding food within Reeval is a possibility when searching through voids dedicated to the Study of the Earth, such as the Braid.[1]

The main form of life within Reeval is the Thread, though many other living, lesser entities, akin to vermin, also inhabit the dimension:

• Fabrils: Non-glowing strands that grow amid the Body. They can grow many miles in length and will sometimes extend into the voids where their sucker-like heads will act the like the heads of carnivorous plantlife.

• Ilstars: Swirling, seed-like creatures 12 ft. in diameter. They'll sometimes drift across the void in pairs, settling on objects and creatures that are smaller than them in an attempt to drain of their heat.

Any other creatures will either creep or float around within the voids. All of them will ultimately rely upon the surrounding bounding walls made up of the writhing Thread.[2]

Farun in the Gyre speak of a wrecked spacecraft that's most pulled under the teeming mass of the Thread. The Farun say that the crew of this vessel is still very much alive, but is sealed within their craft.

A Thread walker called Singer makes noise by playing a variety of musical instruments. Usually it's all cacophony, but it will mimic tunes it hears, and sometimes it creates unique compositions of its own.

On a few occasions, humans who were gathered within the abscission didn't appear to emanate from the Ninth World, Farundiel, or any of the other locales where the Thread has sent out probes. These humans instead seem to be of a far more ancient breed.

The Thread, as a single cognizant entity, has many more abilities than the already awesome capacity to peer into alternate dimensions. It can also gaze into both the future as well as the past.[3]