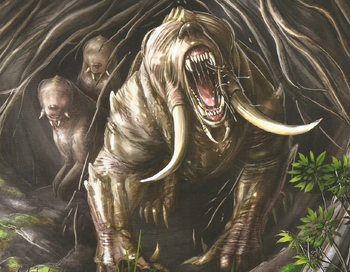 Ravage Bears are tough, ravenous creatures that reside within the Ninth World.

A ravage bear is a hideous mammalian predator that hunts entirely by sense of smell. It's blind and nearly deaf, but it still tracks and senses prey easily. It's very protective of its young, and if hungry, it becomes extremely dangerous. Otherwise, it gives most creatures a wide berth.[1]

Ravage bears dwell alone or in pairs (usually with a few cubs) in wooded, rocky, or mountainous areas, typically in cold in temperate climates.

Makes Might defense rolls as level 6. Runs, climbs, and jumps as level 7

A ravage bear grabs its foe with powerful arms, holds them fast, and then squeezes and tears at them until they're dead. It can hold only one creature at a time. While a ravage bear is holding a creature, it can attack only the held creature. In each round that a held creature doesn't escape, it suffers 4 points of damage in addition to damage from attacks made against it.

A ravage bear can move very quickly in short sprints. In combat, it can go into an insane fury and will fight to the death. If it takes 10 or more points of damage, its defenses are hindered, but its attacks are eased. Ravage bears are immune to visual effects, such as illusions. However, olfactory effects can confuse and "blind" them temporarily.

Ravage Bears are likely chance encounters in the wilderness or unlucky travelers.[2]