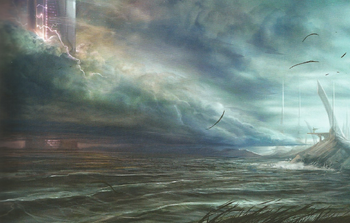 Rarrow is a special city within the kingdom of Ancuan.

If Ishlav is a city built on a city, Rarrow is a city hidden within a city. The founders built it on both sides of a spatial rift. The city on this side of the rift is called Rarrow, but its counterpart on the other side is called Hidden Rarrow. About 5,000 people live in Rarrow, another 2,000 live in Hidden Rarrow.

No one knows precisely where Hidden Rarrow lies in relation to Rarrow. Is it in a parallel dimension, on another planet, or just elsewhere in this world? Many people have their own theories. Hidden Rarrow seems to have the same or a similar sun, but the moon never appears in the night sky, and the stars are similar but not identical. This latter fact lends credence to the belief that the rift isn't spatial in nature but temporal, and that Hidden Rarrow lies further in the future.

The rift is 200 ft. wide and runs through the middle of each half of the city, but it's invisible. Passing through the rift results in a smooth transfer from one side to the other without any sensation of transition. The people of Rarrow know exactly where the rift lies and have built a plaza around it(a matching plaza exists in Hidden Rarrow), but they don't mark it in any way, so newcomers sometimes stumble into it by accident. The rift is unmarked because the city's inhabitants want Hidden Rarrow to remain - well, hidden. They want it to be a sanctuary to which they can flee if invaders ever come to Rarrow. On the other side, defenses are in place - a stone wall and towers to defend against invaders who use the breach with hostile intent. The street in the plaza on the Hidden Rarrow side can be rigged to collapse, and beneath it is a wide pit that the defnders can fill with oil to create a burning "moat."

The people of Rarrow are sea traders and fishers. The harbor is a calm but deep port, and a tall lighthouse at the edge of town guides ships in on the frequent cold and foggy nights. The mayor lives in and works out of a large house in the center of town made from the hull of an ancient flying craft of metal.

Hidden Rarrow is a sanctuary sought by refugees, those on the run, or those simply looking to disappear. Rumor has it that if you pay the city a hefty fee, you can get a place to stay for as long as you wish - with no questions asked regarding who or what you're trying to hide from. It's alsohome to a significant marketplace of taboo, forbidden, or even dangerous goods. This black market isn't an illegal enterprise within the city, but the authorities of the other locales hate it, for it's a place where weapons, artifacts, and worst of all secrets can be bought and sold, and used far beyond Rarrow's borders.[1]