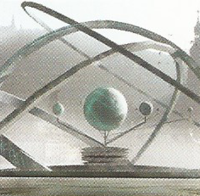 The empire's capital is the great city of Rarmon, home to approximately 80,000 people. This old settlement of marble, stone, and glass once fell into a state of decay but now is being restored to its former grandeur. Everywhere, scaffolds and workers cover important buildings, restoring crumbling facades.

At the heart of Rarmon is the Sunken Palace, the ancient home of the Empress. This structure is unique because the entire thing thing is one, large numenera device. Spherical in shape, it's half immersed in the ground so that it appears to be a dome of metal and synth. The palace can rotate in any direction, however, and even has its own gravity. Thus, the sphere can be rotated so that the entrance is concealed below the surface and the floors within are perpendicular to the ground outside, with no discomfort to anyone within.

Within Rarmon is a large metal orrery that shows the configuration of the sun, the Earth, and six other planets. It turns in accordance with actual movement of these spheres.

The man in charge of maintaining the orrery is a diminutive fellow named Garrot who stands less than 3 ft. tall. Garrot is both an engineer and a mechanic of great skill. By activating the complex mechanisms within the base, he can raise the orrery high above the level of the city so that it commands attention within the immediate area.

The central sphere of the orrery, the "sun", is an electromagnet of immense power. Garrot uses this device as a defensive weapon on behalf of Rarmon, directing invisible beams at anything or anyone he desires. The beams inflict 12 points of damage to a creature or object and 6 points of damage to anything in the immediate vicinity of the target.[1]

A tree in Rarmon records what happens near it and intermittently replays holograms of recent events, with some details changed.[2]