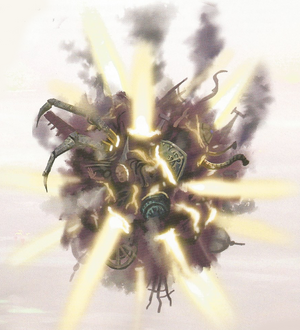 Rapid Fabricators are mutated versions of fabricators that act rogue.

This shuddering, booming jungle of structures moves itself by deforming, rolling, and sometimes extruding metallic legs or wheels. A rabid fabricator is the size of a house and always voracious for more input material, be it synth, metal, or even flesh. Buzzing, smoking, emitting chemical odors, and leaking hafts if sun-bright light, a rabid fabricator isn't subtle. Those who attempt to steal the fire of creativity from the prior worlds but get it wrong and burn themselves. These automaton-like creatures can improve themselves over time so long as they get a hold of the right plans, allowing them to further enhance their already frightening ability to extrude manipulators, cables, and blades of all shapes and sizes.[1]

Hungers for iotum and other base materials

Speed defense as level 4 due to size

A rabid fabricator can create specialized modules that emit rays of electricity and simultaneously target up to three creatures within long range.

At the same time, though, any creature within the immediate range of a rabid fabricator risks being caught inside an intake orifice. If caught, a victim will sustain 7 points of damage. A character who dies from this damage is consumed, and their body becomes raw material for further fabrication. Installations, artifacts, or any similar numenera objects of level 7 or higher will distract a rabid fabricator from going after living creatures, unless it's attacked, in which case it defends itself.

As long as the rabid fabricator has taken raw materials recently, it regains 3 points of health per round.The entity is able to break down installations and other numenera objects of up to level 7 over the course of minutes to hours.

A rabid fabricator can be treated as a rank level 4 rampaging beast.

Rabid fabricators might communicate through a control surface that's found somewhere along there bodies, but obviously, accessing the control surface itself is dangerous. Doing so could calm one for several days, especially if it's offered continual, raw material input.

A wright makes a mistake, and the fabricator installation begins to act crazy.

A destroyed rabid fabricator yields up to a few cyphers and 4 or 5 rolls on the Iotum Result Table.[2]