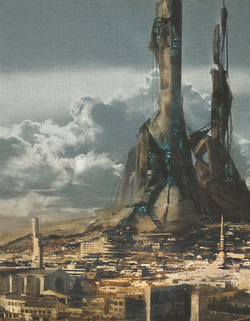 Growing from the ruins of a prior age, Rachar is a place full of ancient buildings made from stone, steel and Glass that still stand. Some of these structures have proven to be too difficult for the inhabitants, some have no easy egress or point of entry, and others are unstable and threaten to collapse. A few of these buildings house dangerous and mysterious machines that are best avoided. If necessary, the buildings are barricaded to people out.

Living amidst machines and structures from the past, the city is no stranger to the weird; talking Statues, moving walls and streets, sudden energy fields that block doorways, it's always filled with the unexpected. A floating structure of metal and synth hovers high above the city. It may have once been a vehicle of sorts, but no one has yet discovered how to make it move. The city watch utilizes it as an observation platform to monitor Rachar and the surrounding lands for any signs of trouble. Reaching the Platform itself usually involves the employ of a gravity-manipulating mutant named Baurn.

Rachar is ruled by one of King Noren's friends, a man named Terrhvyss. He has a metal clawlike hand and an artificial eye, but often hides these features as if embarrassed by them. He is a wise and capable leader who covertly hoards the numenera in a vault within his estate. A few people who happen to know his secret believe that he stockpiles the numenera because he loathes the artifacts of the past and wishes to protect the world from the dangers that they represent. In actuality, however, he gathers the objects in order to rebuild his own body.