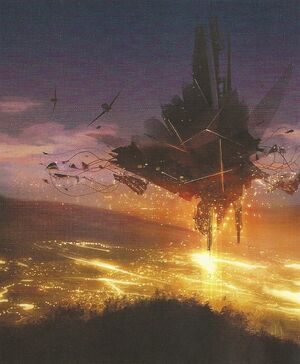 Pursectran is a parallel world ruled by a flying-fortress city inhabited by the Pure.

In a cognate world that diverged from the base dimension during one of the prior worlds, the Earth is under stewardship of a flying fortress-city called Pursectran. The fortress is composed of a constantly shifting jumble of reflective metallic blocks, sinuously reaching tendrils, and an armada of tiny golden automatons. Pursectran also sends forth tiny elements of itself, shaped at need, which appear like high-flying gliders of metal and synth.

Entities called the Pure inhabit the fortress. the Pure might be a kind of automaton, though they flow into and out of each other in the same way the outer fortress changes shape and purpose. This means that each is part of a greater whole, but each also claims a sense of individuality. Many of the Pure don't exist as discreet bodies at all, but rather as though forms that inhabit imagined environments hosted within Pursectran.

The flying fortress is constantly harvesting the surface of this divergent Earth for objects and devices. Even drit is valuable, or at least worthy of study.

The only other intelligent creatures the Pure encounter are usually dimension walkers, because in this timeline, all intelligent creatures joined with the Pure aeons earlier. Thus, when dimension walkers are encountered, it's something of a momentous occasion. Such visitors are greeted by a representative called the Pure Emissary who flies down as a gliding wing, then transforms to reveal itself as a being that mimics the visitors. It can speak most languages and quickly learn new ones. It invites visitors to return with it to Pursectran, where many wonders can be learned. Those who accept are taken up into the fortress and become, for a time, as the Pure, which means they exist as both one and many. Most dimension walkers who experience this gestalt discover that it's so transcendental that they never wish to leave. The Pure are happy to welcome new members, though also perfectly willing to allow anyone to leave at anytime, usually with parting gifts in the form of several cyphers and an artifact, and an invitation to return at any time.[1]