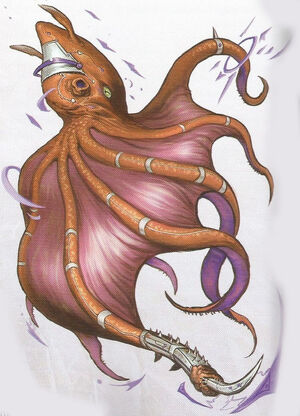 Phayclor are squid-like monsters that feast on energy beneath the seas of the Ninth World.

These bizarre squid-like creatures are composed partly of flesh, partly of cyphers and artifacts that they accumulate to siphon energy from, and partly of delicate energy fields liberated from said objects, which these creatures use as a protective (and offensive) mantle. Phayclor are about twice the size of a human.

The sea is a wide and deep place, and many varieties of phayclor inhabit it, but all seek out powered devices as sustenance. A rare few phayclor live long enough to grow far, far larger. Thankfully, these rarely stir from the ocean depths.[1]

Defends against energy attacks as level 8; stealth as level 7 when using chromatophores to blend into surroundings.

A pahyclor can attack by lashing a foe in immediate range with a tentacle that inflicts 4 points of damage and holds the target from moving (until it can escape), or it can release an energy burst in the water that stuns all creatures in immediate range, causing them to lose their next turn. This latter attack can be attempted once every other round.

A phayclor can also use a random cypher that it's incorporated into its body, either gaining the effect the cypher provides (if useful) or hurling the cypher as a level 7 detonation. Each time a phayclor uses one of the cyphers making up its body, it loses 1 point of health.

Finally, a phayclor can feast on energy directly. If a beam or energy attack made against it misses the phayclor, it's healed by the residual energy and regains 2 points of health.

Phayclors speak with each other through rapidly flashing chromatophores. They have no ability to understand other creatures, unless one uses a cypher that can open a channel of communication.

A colony of phayclor has taken up residence in the bay, making things dangerous for everyone who lives in the area. It's possible that they could be convinced to relocate, but only for a quantity of cyphers offered as a bribe.

Every phayclor "carries" 1d6 + 1 cyphers, though if slavaged, most are found to be at the minimum possible cypher level thanks to the phayclor's metabolic feeding.[2]

A famous painting in Qi features a colossal phayclor reaching up out of the ocean to pull a zeppelin to its doom.