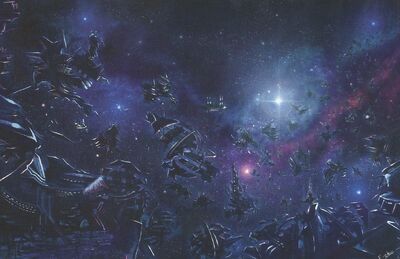 The Phaeton Halo is a large belt of debris orbiting the sun.

The Aeon priesthood describe this wheel-shaped region of space as being the broken-up remain of some prior-world's penultimate achievement, calling it simply the "Phaeton". Since then, a race known as the otolins have claimed the entire halo for themselves. The halo is known to cover a diameter so wide that it literally takes light about 22 minutes just to travel from one side to the other. Because of the airless, zero-g void that comprises the halo, explorers would need breath recyclers and void suits to help them survive, especially when it comes to the sun's direct rays or its otherwise freezing shadows.

Detritus storms are deadly meteorological events that occur when thousands of tiny synth fragments sleet throughout an area, pummeling it with steel-hard rain. Luckily, however, the otolins have managed to map out the direction of the storms in order to avoid them.[1]

The dominant flora of the Halo actually seems to be biomechanical in nature. It's composed of a grass-like black tendril that grows inside smothering mats over exposed synth and other processed material if given half the chance. Referred to as scuti root, this plant tends to soak up available light, and from a distance greater than long range, it will camouflage otherwise reflective debris, thus giving it the illusion of ash and asteroid rubble.

If left undisturbed, a patch of scuti root will bore holes through even the toughest of synth hull plating (though the process can take years to do) and extend root-like tendrils into the hollows within, seeking any form of power source. Whenever a patch finds one, it will sprout one or more ebony fruit shaped like hearts. Otolins, among other prospectors, are aware to seek out these fruits throughout the Halo, not only as a sign of potential treasures hidden inside, but also because each fruit mimics a level 5 detonation cypher. (Such a blast will also spread scuti spores far and wide.)[2]

Grendlim are predatory, biomechanical creatures that hunt across the Halo. Resembling 10 ft. long angular lizards scaled with synth, grendlim have no rear legs, but they do possess a long tail with a jet-like vent at the tip, which allows them to move with remarkable agility. Their pack tactics make them stand out as a common danger in the Halo. While not a fully sapient species, the strategies that any given group employs to bring down much larger prey - including otolins, kruem, and (in at least one storied incident) a wharn - can make them seem devilishly smart.

Grendlim always seem to be able to predict how exactly their prey will react, which way it will flee, and where it will try to hide, even before the prey itself realizes it. The predictive facility, along with teeth that can bite through nearly anything and their ability to spit sticky nets, means that the grendlim should be avoided at all costs. On the other hand, if a pack is defeated by a group of otolins or prospectors, the grendlim survivors learn to avoid marking the same crew as prey in the future.[3]

Spider-like creatures with central bodies several times larger than that of a human, ramaks are best know for their limbs, which can reach yards or even in some circumstances miles (up to 3 km.) to find footing amid the tumbling Halo (the legs seem to pull mass in from a transdimensional source in order to stretch so far). Ramaks feast upon the rubble, patches of scuti root, and pretty much anything else that doesn't fight back; these creatures occupy a niche at the intersection of grazing herbivore and scavenger. The latter quality is why they'll sometimes follow either kruem or grendlim from a safe distance away, and often use their spear-like legs to defend themselves only if bothered.[4]

Mechanical life that mimics real biology will often be susceptible to the same invisible energies that sleet through space affecting flesh, though this particular vulnerability stretches across far longer timescales. Still, machine fauna from the Phaeton halo has developed various ways to protect itself. The void snail is one such example, that spins red crystalline shells from out of the synth - rich rubble from within the Halo. The larger they grow , the more void snails will add continually to their shells, over time, the shells can reach impressive sizes. In fact, otolins use evacuated shells as dwellings, storage, and even as the basis for special vessels that the use to rapidly move around the Halo.

A void snail isn't automatically aggressive, but if pressed, it will defend itself with acidic spittle that's able to eat through almost any substance.[5]

A kruem is a being fused of flesh and synth that lives out most of its life throughout the airless void of the night, prowling the Halo for nutrition from special synth grades, minerals, and energy sources smeared out in a massive ring around the sun. That nutrition can sometimes be extracted from raw chunks of ruined artifacts bigger than houses, but other times it can also need to be torn from the defeated bodies of other void-adapted organisms. A kruem maneuvers through space with tiny jets of an ethereal blue flame that emanates from its palms and feet, but it can also launch itself with extreme velocity, and then rocket away in any chosen direction on a flare of burning plasma.

Kruem are known to be resistant to massive shocks, even when falling to the surface of a planet like shooting stars, which they'll do every few centuries or so. Falling kruem will often target barren places along the Ninth World to crash down upon, spawn and then lay eggs before blasting off again into the night.[6]

Message in the Body:[edit | edit source]

Years ago, an Aeon Priest named Khotanis discovered a prior-world installation on Earth that had the capability of viewing and transmitting messages to certain locations to certain locations within the Phaeton Halo. Entities in some locations will occasionally answer back. When Khotanis contacts the Halo, she can transmit words, objects, and even people, though the latter power sometimes comes as a surprise to those sent over someplace.

a group of otolin prospectors calling themselves the Moiza have decided that it's easier to steal from others than to take their own claims. Their strategies for flushing out new targets continue to evolve, and to this end, they've started offering payments in cyphers and oddities to anyone who gives them leads on fresh claims made by other prospectors.

Recently, one image has begun to repeat with some frequency on the Vendav's Ring's screen: a massive vessel glowing with some ghastly purple-blue prominences. Otolins who glimpse it say they feel an unmistakable sense that the vessel represents something malign, mainly because said glimpses coincide with bursts of machine channel static that contain fragments of words and ideas, all of which are apocalyptic.

Scuti Root is essentially a plant, but some patches have been found to communicate with other patches via machine channels. they seem to be sharing information regarding the object through which they are embedded, alongside less easily understood messages.

At regular intervals, comets that arrive from far beyond the Halo sweep in from the cold. But some of them are more than just rock, ice, and compacted dust - they're devices that glow blue and white, and they have the a limited ability to change their direction. Otolins believe that these are scouts for a much larger force that will one day emerge from the great void beyond the Sun.

One of the larger pieces of rubble making up the Halo is called the Egg because of its resemblance to such an object on Earth, with exception that this one is miles longer. Recently, growing cracks along the length of the egg resemble a little too closely the slow-motion hatching of something inside.

A recently discovered object within the Halo appears to be a massive living tree of at least 60 miles long that's surrounded by its own atmosphere. Animal-like creatures crawl along its surface and burrow within the crevices of its bark which are as deep as canyons. The discovery of one such Great Tree suggests that there may be, in fact, other residing throughout the Halo.[7]