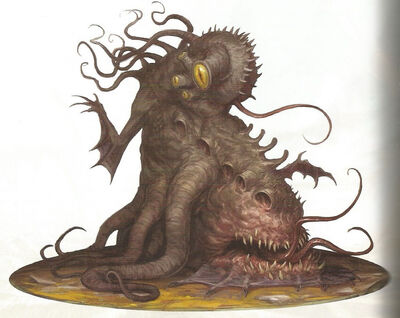 Parialls are ultraterrestrial creatures that mimic their environments.

Parialls hide in plain sight, usually in flat pieces of art, as chalk drawings, or as scratches on drit or stone. A pariall reveals itself to lone victims, taking on full dimension and substance in order to physically attack.When hiding, a pariall mimics its surroundings. For instance, if hiding in art, it might appear as a kindly old scholar, a child, or an animal in a landscape. But when one takes on dimension, its true form is also revealed, which is a horrible fusion of flesh and limbs as of many, many dissimilar creatures.

Like a snail with its shell, a pariall takes its two-dimensional curled-up pocket plane with it when it moves, though unlike a snail, the curled-up dimension is invisible.[1]

All tasks related to disguise and stealth as level 6.

Parialls move imperceptibly along flat surfaces, preferring to appear disguised as pieces of art as they do. When one attacks, it reveals it full form. A target damaged by a pariall must make a Might defense defense roll or be pulled into a curled-up pocket plane of two dimensions.

Victims pulled into a curled, two-dimensional space find it wholly unsettling if they haven't visited a similar space before. Out of their element, their only course of action is to attempt a Might task or Intellect task to drop back into three dimensions.

Parialls are intelligent creatures, and a few speak the Truth. A defeated pariall might choose to bargain rather than lose its life. Parialls have an expansive knowledge of other dimensions, since they slide along planar edges like people walk along roads.

In order to use a gate leading to an area of interest, the characters must pass through a gallery of paintings. One or more of those paintings is infested with parialls.

Parialls keep the belongings of their past victims with them in their curled-up dimensions, and defeating one might cause the entire pocket dimension to empty out, revealing a few cyphers amid all the bones and garbage.[2]