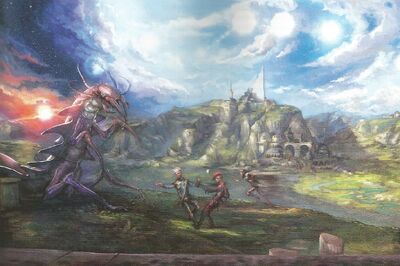 Panaton is an alternate dimension where time doesn't flow normally. It is also the native plane of the Thexx and the Dothin.

A story attributed to a visitant named Gmaun the Timeless portrays the world it originally hailed from as a place where time works differently than in the Ninth World. The learned believe that the story actually describes another plane of existence where time is as fickle as weather. This dimension, called Panaton, is where cause and effect aren't straightforward at all. Where time is inconsistent, like a breeze that blows sometimes faintly and other times will kick up into a gale. Within Panaton, creatures may be born, live out their lives, and die in a twinkling, while other will simply stand as immobile statues, swimming toward the future one era per heartbeat. In some rare and dangerous cases, time can even sometimes flow backward.

Upon arrival, dimension walkers may at first believe that they've merely discovered another parallel universe, since the atmosphere, temperature, lighting, gravity, and the even their physical location seem cognate with Earth. But it soon becomes readily apparent just how strange their new venue is.

Any means of transdimensional travel can get one into Panaton, aside from a trip through the Sideslip Fields, where instead of a locale cognate with their Earth location, characters will be lead onto an empty plain.[1]

Some of the plants and wildlife the characters will encounter might be very much like those otherwise encountered in the Ninth World. Others, however, are adapted to Panaton's varying time states:

• Grelis - A prolific species of plant life with black stems that reach 3 ft. in height with broad, white leaves. It outcompetes other species by consistently remaining inside a super-accelerated time state, moving quicker than most native plant species can manage. Observers in other time states will watch it seed, grow, spout, and spread within minutes. The only thing that keeps its population in check is a species of insect called whip flies.

• Whip Flies - insects that also live in a super-accelerated time state, they're normally invisible to other, slower-state creatures, the whip flies prevent grelis from overrunning everything.

• Greecalian - powerful predator that waits in a slowed state (almost like a time stuck state) but one that allows them to still remain aware of their surroundings. When prey draws near, they switch to an accelerated state, and ambush their prey, trying to overcome victims so quickly that they don't have a chance to respond.

• Mraran - A tiny, red, snake-like beast whose spittle rapidly ages the flesh that it touches.

• Kor - A mouse-like creature that can swarm targets en masse, only to hide by jumping a minute into the future.

• Barsin - A houndlike beast that jumps back in time to ambush any previously-encountered prey.[2]

The University of Doors, located within its own private dimension, opened a door into the Time Fortress. At least one group of researchers entered to explore the odd dimension of twisted time lying on the other side, only to completely disappear. Tougher dimension walkers are sought to find the original, missing explorers.

A pack of dothin discovered a cache of time adept cyphers that allow them to enter extremely accelerated time states. They've been utilizing them in order to raid other packs of dothin. Rarely do dothin act against other of their kind, even within separate packs. Whoever stops these time bandits would be greatly rewarded by all dothin clans.

Inside the ruined Time Vault 3, a destroyed mass of forgotten technology glows. The Thexx who emerged from this vault give it a wide berth. Anyone who visits the vault will forget a treasured memory, such as the name of a parent, a triumph, or even time spent with a loved one, as well as what precisely happened inside.

This tree-like tower of white metal sometimes will burn with a verdant blaze. when it does, a ripple propagates outward, synchronizing all tie states of creatures and objects for miles in the sequential state for one hour. During this period, one can enter and leave the Badlands without getting caught inside a time loop, so long as one leaves before the hour is up.[3]